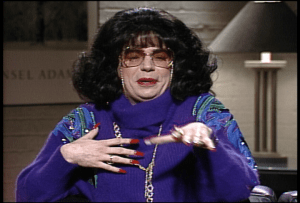 At our dance weekend recently, there was an ongoing discussion. It was not about whether or not I was a typical “Jewish mother,” THAT…was a foregone conclusion. I’ll walk in that truth; it is not something I can change biologically, or figuratively. The topic that ensued, however, was the definition, the rubric if you will, of the elements that constitute Jewishmotherism. Non-Jews in our group contributed proactively, Jews themselves were merely nodding affirmations of the stereotype, and, it is a stereotype to be sure, but I still don’t mind owning this particular one.

What you see on a Google search for “Jewish mother” is not attractive, and not complimentary. Yet, rhapsodies have been written about Jewish mothers, too. We’re brought up to be the way we are. Classic Jewish mothers can be seen in theatre: in Fiddler on the Roof, more recently in Transparent, and, interestingly enough, when I typed in Jewish mother, it brought up several YouTube clips of the Ross character in Friends; you don’t have to be female, you don’t even have to be Jewish.

I wanted to explore what we really mean when we call a person a “Jewish mother.” We agreed that the first element was the desire to feed others. I was called out on this for my proven track record of hosting large food-centric celebrations not just in my own home, but even when I’m out of town, on the road, and even in other countries. I’m the quickest draw on the Yelp in San Francisco or Santa Barbara; I dragged as many as twelve dance weekend participants to an Italian eatery in Santa Barbara last weekend, soliciting the Jewish mom reference in the first place. One of the participants had been among a posse I brought out for late-night dining two weeks earlier in SF. I’ve invited twenty people show up to Denny’s after an evening of dance, running ahead to make sure they were ready for us.

For me, feeding is a way of showing love. I once dated a guy who, after the first date, refused to share meals with me…no hope for a relationship there! My mother was a feeder, from a family of feeders; she kept track of everyone’s favorite pie preferences. Instead of two apple pies for all, she’d go out to Marie Callendar’s and have a piece of rhubarb pie for Uncle Seymour, pecan pie for my dad, peach for me, and so on. Even my ex-husband remarked to our sons when he heard I was going up to the Bay Area to see them, “I guess you’ll be eating well this weekend.” He’s often said the thing he missed most after the divorce was my meals. I love cooking, and when I cook, I cook big. I derive pleasure from seeing people enjoy the food I make. Im even happy when people enjoy my restaurant choices. In terms of Jewish-mother standard number one, I fit the bill with a 4 out of 4.

The second element, we decided, is the ability, and the obligation to, problem solve. When you have situations with many moving parts, nothing like having a Jewish mother on staff to figure stuff out. We’re not patient, tsk tsk listeners; we hear problems and immediately start thinking of ways to alleviate them. Most of the jobs I’ve held have required me to be a problem solver, from being a travel agent, to more senior positions in the travel industry, to becoming a teacher, and now, with the administration of Culver City’s three non-traditional education schools. If I had to say in a nutshell what my job consists of, I’d say, “acting like a Jewish mother.” I have tons of proverbial plates spinning in the air, feeding others, from students to colleagues, with information and ideas instead of food, and solving problems as they come along, whilst devising creative ways to smooth the path for the future. It’s basically what I did and continue to do for my own kids.

Our dance weekend ended before having the chance to discuss a third element, but I finally figured out the last, least attractive, piece on my own. It is the tendency to worry. Women of other ethnicities (by the way, when I speak of Jews I speak of ethnicity, not religion, and never race) do not worry like a Jewish woman. In Asia, especially Japan, there is the mentality of “shikata ga nai” meaning, “something that cannot be helped,” like ascribing whatever is to be to karma or fate. In the day, we quoted top he famous Doris Day song, “que sera sera,” today we are find of saying, “it is what it is.” I’ve heard, and admired, Christians talking about how this or that is “in Gd’s hands.” For the life of me, however, I can’t stop myself from worrying. When my mother was around twelve, her mother, grandmother and aunt all died within a couple of years, between 1943 and 1945, in the middle of World War II. I can therefore understand somewhat why she might have been a worrier, but her insecurities somehow brought me up to be the same way. My efforts to want to make everything right, and keep everyone safe, is the antithesis of Hakuna Matata. And when it came to The Lion King as well, the king of the forest doesn’t just say “Hakuna Matata,” he takes action. And that is the third piece of the Jewish mama psyche. This is sometimes called – and if you ask my sons, they’ll swear to it – overprotectiveness.

In summary, a Jewish mother is a little annoying, and a little cloying, but the people she serves can never deny their appreciation of having her in their corner. We’re made of tough, indelible, stuff, and will at least never be forgotten for our contributions and force of personality. So, yes, I will take the compliment of being called a Jewish mother.