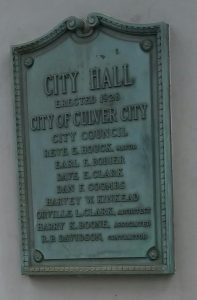 “Locals knew where to stand to get autographs.”
One of the best parts of Saturday’s Walk with a Doc was soaking up Culver City history from Julie Lugo Cerra (pictured with the crowd in front of the Culver Statue). Toward the end when Cerra, Culver City Historian, and Hope Parrish, board member of the Historical Society reminisced in front of the Culver Studios. The two long time Culver Citizens were toddlers here. They shared memories of people who worked either for Hughes Aircraft or one of the three studios in town. One particularly poignant story was an insight into one of the biggest stars in Hollywood. A woman answered her door one day to a man who begged her pardon, but told her a small girl had climbed on top of a trellis and did not look like she could get down easily. He asked for the woman’s permission to help the child.

The man was Clark Gable.

The anecdote evokes growing up in Culver City, bustling with actors and celebrities, where “locals knew where to stand to get autographs,” Parrish said. Creating the heart of screenland was city founder Harry Culver, tirelessly cultivating businesses, his passion luring Thomas Inch to move his studios here from Hollywood to make his town a city of stars.
The art deco buildings and other distinctive buildings in the freeform “square” of downtown are many and full of tales told by docents from the Historical Society. Like the romance between Culver, a single-minded businessman building his own city, thunderstruck by his first sight of 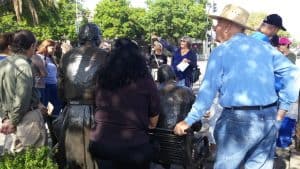 Lillian Roberts walking past the substation in now Media Park. Enamored, he moved heaven and earth to arrange a party so he could meet the attractive actress. They were married within a year.

Stu Freeman, a third generation Culver Citizen, told the story of the Hull Building, damaged in an earthquake strong enough to cause bricks to fall from the façade. Another building being demolished at the time had been built of the same materials. The owner offered bricks to repair the damage to the Hull.
Freeman said the bricks matched so perfectly, he offered a pile of them to another building damaged in the quake and made of the same bricks. Culver City was busy growing, but still maintained a small-town sense of sharing.
Cerra recounted and corrected several persistent stories, one of them that the long arm of Washington west was created by Culver to annex a dog racing facility where Costco now sits. It was because Culver, always a businessman, wanted both sides of Washington to be lined with businesses and restaurants to entice people to populate his little city, she said.
Another tale is related because Culver’s avaricious nature created a crazy quilt of borders with LA, Cerra said. Main Street turns into LA at the alley when it becomes Bagley Avenue. It has been called The Shortest Main Street in the USA, she said.
During Prohibition, establishments, which were often divided between Culver City and Los Angeles, kept their cash registers on wheels. When they received word of a raid, they wheeled it to the opposite jurisdiction. She also debunked the tales of a tunnel (now filled in) under the now closed part of Washington being used for nefarious reasons like escaping raids. It was so hotel guests could get to and from their lodgings by avoiding the busy street.
So between stories of glamorous good Samaritan movie stars, Munchkins sleeping sideways three-abreast in beds in the Culver Hotel while filming the Wizard of Oz, crafty bootleggers and cupid striking the founder of Culver City near the spot he’d chosen to start his city, the buildings, history and past doings took nearly two hours. And yet only scratched the surface in the long and colorful history of Culver City. Find out more by visiting the archives, which are open at regular intervals. Go to culvercityhistoricalsociety.org for more.