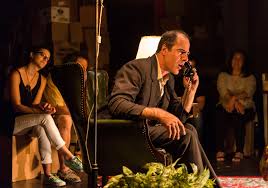 Center Theatre Group received submissions from 76 local theatre companies from North Hollywood to San Pedro, Topanga to Sierra Madre for the inaugural Block Party: Celebrating Los Angeles Theatre at the Kirk Douglas Theatre. Block Party will highlight some of the remarkable work being done on stages throughout Los Angeles by fully producing three previously staged productions.
Three productions will be selected for presentation at the Kirk Douglas Theatre, April 14 through May 21, 2017. Each production will have a two-week run with 11 performances and will be part of a three-month collaboration with Center Theatre Group. The visiting companies and their productions will receive the full support of Center Theatre Group and its staff in order to fund, stage and market each production. The three visiting companies invited to join Block Party will be announced in December.
“I’m excited to get artists and arts administrators we haven’t worked with before into our building,” said Center Theatre Group Associate Producer Lindsay Allbaugh. “More collaboration can only strengthen our community as a whole, and our community’s national reputation.”