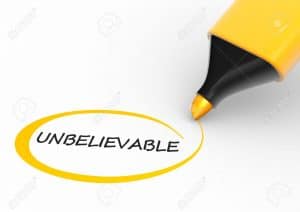 There have been phrases leaping out of the radio, jumping from the newspapers, over and over again. “No historical precedent,” and “unknown territory,”  are among them. But the one word that comes up again and again is “unbelievable.”

It is beyond belief that anyone supports this candidate. At this point, it’s an exercise in credulity.

But it’s not just the Republican Candidate that’s unbelievable.

I’ve noticed that popular usage has shifted the word as well; I keep hearing it used as a synonym for “great.”

As in “I won the tickets to the concert? Wow, that’s unbelievable!”  (Really? So it wasn’t a contest, it was a hoax?)

Or “We had the most unbelievable chocolate pie!”  (It turned out to be a mud puddle?)

Or, as I heard many sports announcers exclaim during the Rio Olympics, “A new record! Unbelievable!” (Oh, so the old records are to be believed, but not the new ones?)

I love the plasticity of the English language, the way we can adopt words from other tongues and add in phrases from other cultures. In fact, California is the home of more English slang than any other place in the world. But it’s disturbing when a word changes usage so completely as to change meaning.

It sounds as if we longer have a belief that anything good is real. If unbelievable means wonderful, fabulous, terrific…do we feel these delights are false?

I’m going to hold to the original definition –  not able to be believed; unlikely to be true.

Meanwhile, the Democratic candidate, who is historical and unprecedented for lots of good reasons, is carrying on, talking about shaping policy and why she deserves your vote. The only thing I see moving against her is the long tradition of denying women positions of power.

Feminism is the theory that women are people. Why is this still theory and not practice?

Do you really want to frame an argument that women are not people?