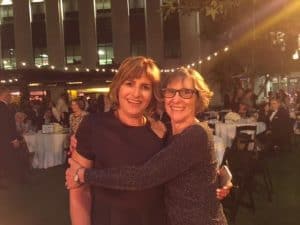 Sony Studios has a well deserved reputation as a magical place – movies, television shows, artworks and events that happen there are influential. While Janice Pober, the Senior Vice President of Corporate Social Responsibility, is known for her powerful support of students in the arts, she outdid herself on Saturday Oct. 1 at the Centennial Gala, announcing a $50,000 gift for the Culver City Education Foundation to commemorate the city’s anniversary.

“I had no idea at all,” exclaimed CCEF Executive Director Leslie Adler, seemingly overwhelmed with excitement.”What a great cap on the whole evening!” as the dance floor filled up and partygoers stepped together in style.

While Mayor Jim Clarke agreed that we were really celebrating the 99th anniversary of the founding of Culver City, noting that “we are just starting to stretch out into the great year ahead of us.”

The Gala was deliciously catered by Wolfgang Puck, and the cocktail sipping crowd clearly enjoyed being serenaded by the AVPA Jazz Band featuring Isabella Bustanoby on violin and Izzy Parra on vocals.

The formal program began with everyone’s favorite Master of Cermonies Mike Cohen lauding both sponsors and citizens, introducing the elected officials present, and the collected City Council and School Board all turned out.  Paul Jacobs, President of the Centennial Committee, spoke about the Centennial Parade and the year that is just beginning. He also introduced a video created by Historian Julia Lugo Cerra that took Culver City from the beginnings of the Ince Studios and the city charter to the current landscape of entertainment and technology industries and award winning schools.

By the time Ms. Pober announced the Centennial gift to CCEF, there was an agreement among the guests that if 99 was this good, 100 was going to be really special.