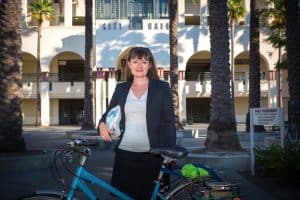 The Firefly Ball Innovator Award is presented yearly to a local official whose cycling advocacy efforts have made a broad impact in Los Angeles County. LA County Bicycle Coalition recognizes a innovative champion of bicycling who recognizes that communities that are better for people who bike are better for all community members. Meghan Sahli-Wells will be receiving this year’s award following our inaugural winner, Suja Lowenthal, and last year’s co-honorees, Los Angeles City Council members Joe Buscaino and Mitch Englander.

Meghan Sahli-Wells is a Culver City Council Member and former Mayor who was re-elected to her second Council term in April 2016. Prior to being elected to the City Council in 2012, Meghan spearheaded a number of community initiatives and has multiple community leadership roles. Notably, she co-founded the Culver City Bicycle Coalition (now called BikeCulverCity), one of the first local chapters of the Los Angeles County Bicycle Coalition, and Transition Culver City, part of the international Transition Network.

As the fifth woman to be elected to the City Council in Culver City’s 99-year history, Meghan has championed initiatives to improve the lives of children, and has led efforts to address climate change, active transportation, affordable housing, homeless services, government transparency, and the health and environmental impacts of oil drilling. She has a passion for analyzing complex issues and encouraging community engagement, with the ultimate goal of finding solutions that promote a resilient and sustainable city. She is the Chair of the Council’s Sustainability Sub-Committee, and serves on the City Council/School Board Liaison Committee and Oil Drilling Sub-Committee.

In addition to her City Council duties, she is on the national board of Local Progress, a network of hundreds of local elected officials from around the country who are committed to a strong economy, equal justice, livable cities and effective government. Regionally, she’s a Board Director of the Westside Cities Council of Governments and the Southern California Association of Governments (SCAG), the nation’s largest metropolitan planning association. She also served on the Board of Directors of the highly successful Metro Expo Line Construction Authority during the build-out between Culver City and Santa Monica.

The 3rd Annual Firefly Ball will be held Thursday, October 27th at The Reserve in downtown Los Angeles. To get your tickets, sponsor a table or learn more, go to la-bike.org/fireflyball.