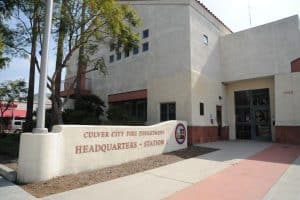 The City of Culver City will have a remembrance ceremony to honor the men, women, children and first responders who lost their lives as a result of the September 11, 2001 attacks. The Fire and Police Departments will host memorial services at each of the three City Fire Stations on Sunday, September 11, 2016. Members of the public are cordially invited to attend.
Below is the ceremony schedule and address of each fire station:
6:55 a.m. Crews assemble in front of flag
6:59 a.m. Time of the South Tower collapse
7:00 a.m. One minute of complete silence
7:01 a.m. Flag lowered to half-staff
7:03 a.m. Ceremony concluded
Station 1  9600 Culver Blvd.