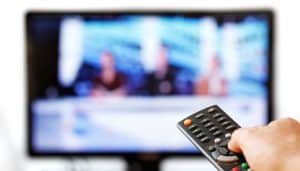 More than once, I had to ask myself, what am I looking at?

I felt a sense of relief turning off the television after the end of the Olympic closing ceremony. I don’t usually watch sports but I can’t resist the Olympics; the ritual, the spectacle, so many athletes at the peak of their powers. But coming right after the national political conventions, I’ve spent so much time in front of the tube this summer, I may qualify for couch potato status.

As someone who is well aware that what I’m watching is produced, stage managed and manicured for effect, it’s a balancing act. Watching television does not relax me. It puts me into a habit of extreme discrimination, deconstructing why there is a red car in a commercial and not a black one,  why they are using Beethoven on the soundtrack and not Vivaldi (or the Ramones or Pink?)  More than anything else, language – the speeches, the commentary, this river of words pouring out of a machine that I have chosen to sit in front of. What am I listening to, and why?

As the joke reminds us, “That’s why they call it programming.”

There have also been a lot of words on social media about lack of coverage, about the lack of commentary. The unprecedented weather event that created the flooding in Louisiana, the Native American standoff against a pipeline, the things that should be front and center are instead invisible to mainstream media.

I keep hearing people bemoaning the fact that the news we feel we need is not what is being broadcast (or printed, or posted) and we are left with bread and circuses.

The corporations that own the news media have spent the last three or four decades removing all the news from the news business. When I am at the gym and have the painful option of watching three televisions at the same time, the stories don’t vary. It’s info-tainment.

Without meaning to slap my sisters, I know there are millions of women who know more about the Kardashians than they do about the Lily Ledbetter Pay Equity Act. Why?  I can promise no Kardashian is ever going put a dollar in your pocket, and Ledbetter’s law is there to do just that. Pay equity will not be featured on TMZ.

The conventions are week long commercials produced to reflect well on their parties. The Olympics are two week long contests which can be seen in a number of ways, but as broadcast by NBC, they often reflect as the Nationalist Boys Club. And broadcast news – it’s an oxymoron.

So, I’m happy to turn off the tube. It will be quite some time before I watch anything other than a movie on Netflix.

Don’t just sit there, ask yourself – what are you looking at?