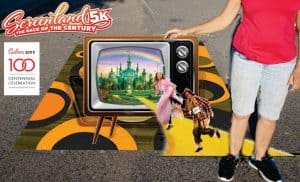 Fiesta La Ballona guests can paint the yellow brick road and pop out of a 3D street painting of the Emerald City to celebrate the Culver City Centennial in a free activity at Veterans Park, Fiesta weekend, Aug. 27-28.

Popularized in the Culver City filmed Wizard of Oz, the yellow brick road artwork by Fiesta La Ballona participants will be showcased at the Downtown Culver City block party, Sep. 24, and will be trampled on to start the Culver City Centennial Screenland 5K on Academy Awards Sunday morning, Feb. 26.
Designed by international street artist and Culver City High School alumnus Lori Escalera, the 3-dimensional street art exhibit will depict Wizard of Oz characters running to the Emerald City on the yellow brick road in a retro television set. Guests can take photos of the illusion, interact with the art and meet the Artist.
“The distorted art comes to life when one stands at an exact vantage point. When people look through that lens, they say, “that’s amazing!” said Escalera, a professional street artist, explaining that the concept of the illusion is known as “anamorphism.”
Escalera, who will be street painting in Victoria BC and Decatur, IL after Fiesta La Ballona, will return to Culver City for the Downtown Block Party to display the yellow brick road and the 3-d art in the Screenland 5K Play Course, co-sponsored by Turning Point School. There, guests can see more Street Painters, have a chance to paint the Yellow Brick Road, and families can try their hand at chalking the streets themselves. Chalk and space will be provided by the Centennial Screenland 5K.
Screenland 5K registrants will receive $5 off discounted early bird prices at the Culver City Centennial booth during Fiesta weekend.
Screenland 5K runners and walkers can dress as their favorite actor on Academy Awards Sunday morning as they follow Dorothy, Toto and the Munchkins pursued by the Wicked Witch of the West on the yellow brick road, experiencing legendary movie and television soundstages at Sony Pictures and Culver Studios, a soaring rainbow, and 100 scenes of lore on the Culver City Centennial Trail. Participants finish on the red carpet with Scarlett O’Hara, Rhett Butler and paparazzi in a once-in-a-century family fun 5K adventure in the Heart of Screenland.