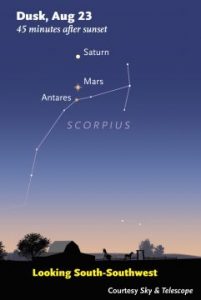 Step outside as the stars come out, look southwest, and you’ll see an eye-catching pattern. For the next few days, bright orange Mars shines to the right of Saturn and the reddish supergiant star Antares. The three form a tall triangle that changes every night.

Mars is moving leftward on its way toward passing between the other two. On August 23 and 24, the triangle shrinks down to a nearly vertical line of three shining points.

After that, Mars will continue leftward and the triangle will widen again, now pointing in the opposite direction.

Fainter stars of the constellation Scorpius glimmer in the area too.

Notice that, being a star, Antares is the only one of the bright three that twinkles. That’s not the star’s own doing; twinkling is caused by the slight heat waves that are always rippling through in Earth’s atmosphere, mostly just a few miles from your eyes. Planets appear larger from our viewpoint, so the separate twinklings of each point on a planet’s face generally average out to a steady glow.

VENUS AND JUPITER TOO. Meanwhile, the two brightest planets—Venus and 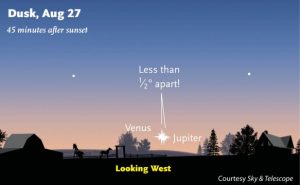 Jupiter—are going through a dance of their own. They’re very low in the sky, due west after sunset. Look for them close to the horizon, somewhat left of where the Sun went down, 20 or 30 minutes after sunset. If you have a very low view and clear air, you’ll see that Venus and Jupiter are drawing closer together every evening. Venus is the lower one. If the air is hazy, binoculars will help.

The brightest of all the planets, Venus recently returned to the evening sky after spending several months as our “morning star.” We will continue to enjoy its presence as the “evening star” through the fall and winter months.

By August 24th, Venus and Jupiter will appear separated by just two finger-widths at arm’s length. On the 26th they’ll be less than one finger apart. Then on August 27th, they’ll have such a close conjunction that you may need binoculars to see that they’re two objects, not one!

Again, looks are deceiving. The two planets merely happen to be along our same line of sight. Venus on August 27th is 13 light minutes from Earth (144 million miles), while Jupiter is four times farther: 53 light-minutes away, or 592 million miles.

Astronomers refer to such close apparent pairings as conjunctions, and this is the last of a recent trio of very close ones involving Venus and Jupiter. The other two occurred before dawn on August 18, 2014, and on October 26, 2015.