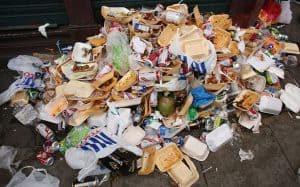 It was not at all surprising that dozens of people spoke to the council about banning styrofoam/polystyrene on Monday evening. Dozens and dozens of legal entities in California and across the country have done so, and there’s plenty of reasons why Culver City should join the list.

As so often happens, we stumble between the desire to make progress and the desire to achieve perfection. Ban polystyrene? Good. Recycle it? Ideal – but not currently possible.

As former mayor Mehaul O’Leary was known to exclaim, “the speed at which government moves…” is one factor in the process. The variable to solve for is speed. O’Leary was one of those who showed up to speak in favor of the ban, (with an exemption for tableware, ) adding his perspective as both pub owner and a member of the board of the Santa Monica Bay Restoration Project.

As long as people continue to show up at council meetings en masse and speak respectfully, they will continue to increase the speed at which this problem gets resolved. This is a proven formula.

Unsurprisingly, anonymous nastiness has posted online. I don’t go looking for this stuff, it shows up in my inbox, often in multiple emails, by readers who deplore the nasty.

What I deplore most is the anonymous. Using a pseudonym to attack someone or something complete undercuts whatever argument you are making, and marks you as a coward. Using insulting language is a clear signal that you are not seeking a solution, you are just having a tantrum.

Since we are all seeing the Republican Party’s presidential nominee (Don’t say the name, Harry, don’t say the name) using these tactics on a daily basis, I can’t begin to attempt to imagine how someone feels this is the way towards progress.

If you are passionate about the pollution, why not subvert the political solution and just stop using the stuff? I know of at least one woman in Culver City who has been bringing her own containers for take out for years. For myself, I tend to avoid restaurants that use it. Tell them you are not eating there because they use polystyrene take out boxes. Vote with your wallet, and vote with your feet, and believe me, your vote will be counted.

Culver City will ban polystyrene. How soon that happens is up us. Perhaps by the time the council passes the ban, so many businesses will have already stopped using it over the loss of customers, it will just be one of those pleasant technicalities.