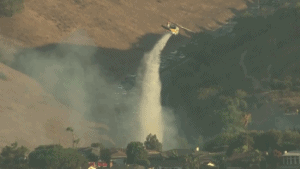 Firefighters battled a brush fire Tuesday on a hillside in the Baldwin Hills neighborhood of Los Angeles, and the emergency response led to traffic delays in the area.

The blaze was reported about 6 p.m. near Coliseum Street and South La Brea Avenue, according to Margaret Stewart of the Los Angeles Fire Department.

La Brea Avenue was closed at Coliseum Street while firefighters attacked the flames, and aerial footage showed heavy congestion during the evening commute.

Flames ran uphill toward a cluster of homes perched near Kenneth Hahn State Recreation Area, and firefighters were establishing a defensive line while dousing the blaze, Stewart said.

By 6:45 p.m., firefighters had the upper hand, with no homes damaged, and the fire was knocked down at 7 p.m.

The blaze spawned several spot fires, which are typically ignited by embers kicked up by the main fire.Crews were expected to remain Tuesday night along the hillside to mop up the smoldering hot spots, Stewart said.