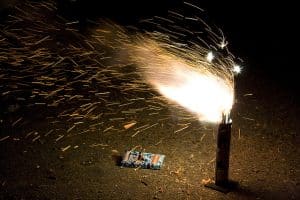 “We respond to every call, every year, ” says Culver City Police Officer Lt. Jason Sims “and we take these calls seriously.”

It seems to many Culver City residents that the sound of random explosions starts earlier every year and runs later. It’s not just the fourth of July, it’s the middle of June. But the numbers from the CCPD note that the problem of illegal fireworks have decreased in Culver City.

“Since we really began to crack down on this, and make sure the community knew we were on it, we have had some success. What we can’t talk about is Los Angeles, and of course, our neighboring streets are not under our jurisdiction.”  Sound carries; the louder the sounder, the bigger the area that will hear it.

“Most of those calls, about 95% of them are about the bottle rocket type [of street fireworks] , and while we do have a very fast response time, often by the time we get there, the fireworks are done, and the perpetrators have disappeared. ”

According to the CCPD records, the past three years there have been no citations issued.

In 2014, the CCPD responded to 100 calls, and actually seized 25 pounds of illegal fireworks. This prompted the department to ramp up the community notifications, and remind people of the official Fireworks Show sponsored by the Exchange Club.

In 2015, officers responded to 49 calls, but issued no citation and did not seize contraband.  In 2016, there were only 47 calls on illegal fireworks.

“People are getting the message,” noted Sims “The challenge is Los Angeles.  With the hazard of fire increased from the drought, we just need to keep on eye on our neighbors.”