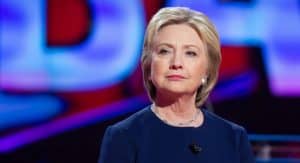 It was back in 1992 when Bill Clinton was accepting the nomination for President, I was at a party in Venice that was turning from loud to rowdy. The convention, as can happen with a crowd of politicos, had become a marathon – binge watching before we coined the term – and only frequent excursions to the boulevard for more pizza, cigarettes and alcohol pulled people out of the room from time to time. By the time Bill was making his acceptance speech, the room was filled with the hope that we might be spared another Republican administration

We nursed a collective hope that she really would break out of the Nancy Reagan mold, and she did not seem to be the matching shoes and handbag type. (During the Regan years, all the women I knew in Venice used ‘nancy’ as a particular epithet, like ‘You so think you know what you are doing, and you just don’t.’)

Not another Nancy, that much was good. But Delilah insisted she was a lot more than that. “She’s got every credential he has – except Rhodes scholar – and backwards and in high heels, right?” Diane said, “This is what we need. This is a real partnership model.”

Last night, just about a quarter of a century later, Hillary Rodham Clinton is the Democratic nominee for President. I have every faith in her to do an outstanding job. I know, she’s going to be judged far more harshly for every real or imaginary issue anyone can bring up, because she is a woman. But, backwards and in high heels, she has done it all. She will do a lot more.