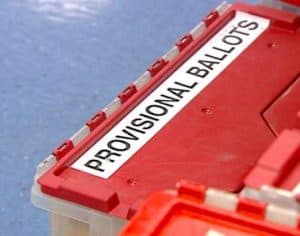 Once reserved for emergency situations, provisional ballots were freely handed out across California on June 7 as a Los Angeles Times analysis finds they were used by more than one of every five primary voters who showed up at a polling place.

But the wide use of provisional ballots has not been matched by any broad statewide oversight, with rules changing from one county to the next dictating when they are used and how elections officials decide whether to count them as valid votes.

“You think it would be clean and simple,” said Donna Tarr, a resident of Rolling Hills Estates who volunteered to observe provisional ballot counting in Los Angeles County last month. A provisional ballot has historically been seen as an election fail-safe, reserved for the small number of people whose eligibility to vote can’t be immediately confirmed by a poll worker.

The ballots are then placed in specially marked envelopes and set aside to be examined after all other votes are counted.

Tarr, 64, was one of several supporters of Vermont Sen. Bernie Sanders who descended on county elections offices after the June election to observe how provisional ballots were processed and how many were actually counted.

When she and others complained that some provisional ballots cast by unaffiliated “no party preference” voters were not being correctly counted in the Democratic presidential race, Los Angeles County elections officials quickly stepped in to fix the problem.

Tarr wanted to know whether it was an issue that stretched to other communities. In late June, she sent an email to state elections officials demanding they intervene to ensure similar problems weren’t happening in all of California’s 58 counties.

State election law is largely limited to the legal right of a voter to ask for a provisional ballot, while leaving a significant amount of discretion to local officials in regard to how often the ballots are used.

Partial data compiled by the state association of elections officers and supplemented by requests from the Times made to two dozen counties found more than 735,000 provisional ballots were cast at polling places on election day in California.

Some 55% of those ballots were from three counties combined — Los Angeles, San Diego and Orange.

Low is the author of a bill pending in the Legislature that would require the secretary of state to create new guidelines for all counties to follow in handling provisional and vote-by-mail ballots.

Individual voters who cast a provisional ballot can currently check whether it was counted and receive an explanation if it was rejected. But most counties don’t publicly post information about the total number of provisional ballots that were received or counted.

Five counties — Fresno, Imperial, Modoc, Mono and Nevada — did not respond to several Times requests for data on provisional ballots.

“Californians expect consistency and transparency in the process,” Low said.

The data makes clear that even with varying rules and procedures, few provisional ballots are disqualified.

“There’s a lot of misinformation out there,” said Rebecca Spencer, registrar of voters in Riverside County.

Spencer and her team certified more than 85% of the county’s 31,435 provisional ballots — close to the statewide average for the June election, according to a Times analysis of election data.

But few believe the existing systems are adequate to handle a steady rise in provisional voting, which some elections officials expect as Californians increasingly request ballots in the mail.

If those voters decide at the last minute to show up at a precinct but don’t bring along the original mailed ballot and its official envelope, they usually end up casting a provisional ballot.

“The more paper you have floating around, the more opportunities you have for confusion,” Canciamilla said.

Low’s bill for new statewide standards is supported by Secretary of State Alex Padilla, who said in a statement that it “will improve voter confidence in the elections process.”

Low said that as voting behaviors change in California, the system must change, too.

“The standards are woefully out of place,” he said. “This is about the integrity of the electoral process.”