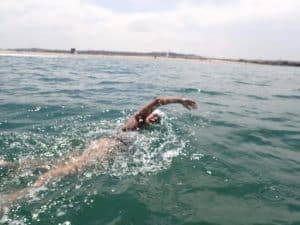 Culver City’s own 20-year-old marathon swimmer Abby Bergman, is scheduled to swim across the Catalina Channel from Catalina Island to Palos Verdes on Sunday, July 25th at midnight. Swimming across the channel is the first in a series of marathon swims that Bergman is planning on accomplishing. She is already scheduled to swim across the English Channel in the summer of 2017 (from Dover to Calais). Bergman, a rising junior attending Smith College in Northampton, Mass., has been training at Smith College under coach Kim Bierwiert, and since May locally along L.A.’s coastline for the upcoming 20+ mile swim. Bergman began her swim career in her early teens as a member of local swim club, Team Santa Monica.

At Smith, she is part of the Swim & Dive Team, competing against the Seven Sisters and the NEWMAC Conference of colleges. Bergman is majoring in Neuroscience with a specialization in Exercise Sports Science, and is planning on attending med school after completing her Bachelor’s Degree. In preparation for the upcoming Channel swim, Bergman recently competed and was first female (and second to complete overall) the 6-mile Semana Nautica Race, held off the coast of Santa Barbara each July.

Bergman has completed many shorter open water races here in Southern California, and participated in the California junior guards program for several summers, eventually becoming a Cadet, and then applying and successfully completing the Los Angeles City Open Water Life Guard Academy. During her summers home in Los Angeles, Bergman works for the L.A. City as an open water lifeguard at Cabrillo Beach. Bergman’s upcoming Channel Swim will be followable by live tracker track.rs/abby.

Bergman is available for interviews before the swim on July 24th and after she Additional Links Abby Bergman’s Blog Categories: Recreation and Sports, Swimming Tags: #catalinacrossing,  #marathonswimmer, #openwaterAbby, #openwaterswimmer has completed it. Abby Bergman can also be followed on twitter @openwaterabby