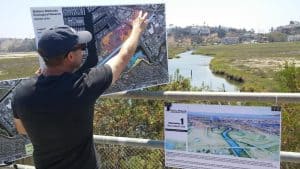 Two non-profit groups, The Friends of the Ballona Wetlands and Heal the Bay,  collaborated over the weekend of July 16 & 17 to show off the Ballona Wetlands to the public by showing volunteers the trash that collects in the sands of Playa del Rey and giving others a glimpse of the rare, endangered El Segundo Blue butterfly.
“Its territory is from Palos Verdes to Ventura,” said Patrick Tyrell of Friends of Ballona Wetlands as he patiently pointed out the bright blue dime-size wings flitting among the salt grass. “After nearly disappearing, we have a healthy colony reforming here in the wetlands.”
The big news that FoBW and Heal the Bay wanted to highlight is the anticipated release this month of restoration plans to bring water back to the wetlands.
“There are three plans, ” Tyrell explained. “They all restore water, just in different ways. You can see the plans at www.ballonarestoration.org and vote for your favorite.”
It is the final wetlands to be restored along LA’s coastline, after 38 years of dedicated lobbying efforts by the Friends and $120 million in state funds to buy the land.
Heal the Bay, which holds a Nothing but Sand beach clean-up once a 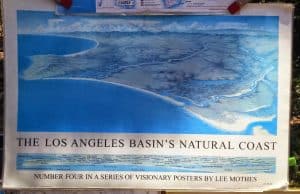 month in LA County, choose Playa del Rey this month to join the Friends to publicize the restoration announcement. The groups both target conservation and the health of the ocean and beaches.
Volunteers play a huge part in their efforts and the 75 who showed up Saturday filled buckets with tons of trash from cigarette butts and styrofoam containers to a dizzying amount of plastics to diapers and fireworks.
“I’m going to be a lot more careful with styrofoam stuff after seeing all this,” said one volunteer as she dumped a bucketful of trash into Heal the Bay’s giant garbage bags.
Fish see plastic straws and tiny pellets of plastic and styrofoam as food, and either starve or get trapped in it.
To see the next activities scheduled by each group, check their websites. While donations are needed and welcome, helping hands are invaluable.