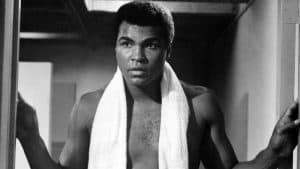 In honor of the recent passing of boxing legend and activist Muhammad Ali, Black Talkies on Parade presents The Greatest on July 30th at 2:30  (please note the early start time.) Released in 1977, this riveting bio-pic features the one and only Ali playing himself in his own story. The film focuses on his Olympic success and his legendary Rumble in the Jungle with George Foreman. James Earl Jones, Robert Duvall, and Lloyd Haynes also star in the movie that also features the classic George Benson song The Greatest Love of All.