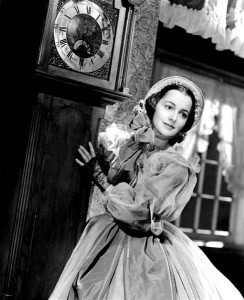 Margaret Mitchell’s ‘Gone With the Wind’, one of the best-selling novels of all time and the basis for the blockbuster 1939 movie, was published June 30, 1936. It is still among the top ten best selling books of all time, and the Culver City film (numbers adjusted for inflation) remains the top-grossing movie of all time.

It was only a month after publication that David O. Selznick bought the film rights for $50,000. While it has been criticized as historical revisionism glorifying slavery, nevertheless, it has been credited for triggering changes to the way African-Americans are depicted on film, and Hattie McDaniels’ win as Best Supporting Actress was the first Oscar awarded to a person of color.

Olivia de Havilland, the last living actor from the film and a Hollywood grande dame from the golden era of movies, celebrates her 100th birthday tomorrow on July 1, 2016. She usually played sympathetic heroines with ladylike airs in a movie career that spanned three decades. But off-screen she was a fighter, maneuvering for challenging roles and winning a tough legal battle against a major studio, a victory that still resonates in Hollywood 70 years later.

This Friday the Oscar-winning actress is celebrating her 100th birthday 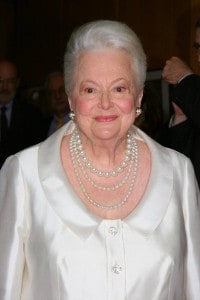 as the last surviving female superstar from the golden era of movies. Her chief male competitor, Kirk Douglas, (also a pretty big name around Culver City) will join the centenarian club in December, but de Havilland made her screen debut more than 10 years before him.
De Havilland won two Academy Awards for best actress — for “To Each His Own” (1946) and “The Heiress” (1949) — after breaking free from what she considered the unworthy parts being offered to her at Warner Bros. She successfully sued the studio in 1943 after it tried to extend her seven-year contract. Under the old contract system, studios wielded enormous power over actors, forcing them to take roles and suspending them without pay if they refused.
De Havilland’s case helped shift the power from the big studios of that era to the mega-celebrities and powerful talent agencies of today, and it remains a cornerstone of entertainment law.
It’s been said that history is news that stays news. Here’s to strong women, their anniversaries and birthdays, and they way they changed the landscape.