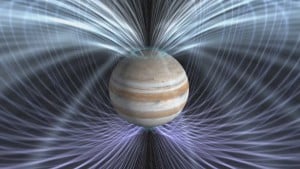 NASAs Juno spacecraft will make its long anticipated arrival at Jupiter on July 4. Coming face-to-face with the gas giant, Juno will begin to unravel some of the greatest mysteries surrounding our solar system’s largest planet, including the origin of its massive magnetosphere.

In order to look inside the planet, the science team equipped Juno with a pair of magnetometers. The magnetometers, which were designed and built by an in-house team of scientists and engineers at NASA’s Goddard Space Flight Center in Greenbelt, Maryland, will allow scientists to map Jupiter’s magnetic field with high accuracy and observe variations in the field over time.

However, the sensor orientation changes in time with the mechanical distortion of the solar array and boom resulting from the extremely cold temperatures of deep space. This distortion would limit the accuracy of the magnetometer measurements if not measured.

To ensure that the magnetometers retain their high accuracy, the team paired the instruments with a set of four cameras. These cameras measure the distortion of the magnetometer sensors in reference to the stars to determine their orientation.

“This is our first opportunity to do very precise, high-accuracy mapping of the magnetic field of another planet,” Connerney said. “We are going to be able to explore the entire three-dimensional space around Jupiter, wrapping Jupiter in a dense net of magnetic field observations completely covering the sphere.”

Magnetic fields are produced by what are known as dynamos—convective motion of electrically conducting fluid inside planets. As a planet rotates, the electrically susceptible liquid swirls around and drives electric currents, inducing a magnetic field. Earth’s magnetic field is generated by liquid iron in the planet’s core.

“But with Jupiter, we don’t know what material is producing the planet’s magnetic field,” said Jared Espley, Juno program scientist for NASA Headquarters, Washington. “What material is present and how deep down it lies is one of the questions Juno is designed to answer.”

The observations made by Juno’s magnetometers will also add to our understanding of Earth’s dynamo, the source of our planet’s magnetic field, which lies deep beneath a magnetized layer of rocks and iron—which interferes with measurements of magnetism under the crust.

“One of the reasons that the Juno mission is so exciting is because we can map Jupiter’s magnetic field without having to look through crustal magnetic fields,” Connerney said. “Jupiter has a gaseous envelope about it made of hydrogen and helium that gives us a clear and unobstructed view of the dynamo.”

Editor’s Note –  CulverCityCrossroads.com has been granted a press pass for Juno’s connection to Jupiter on Monday, July 4, and we will be reporting from JPL in Pasadena.