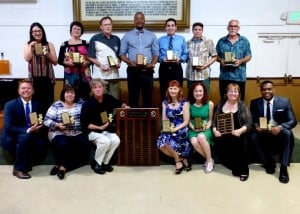 Kentwood Players, the community theater group based at the Westchester Playhouse, was founded in December 1949 by Jan and Arky Marcom, for whom the group’s annual Marcom Masque Awards are named. The first Marcom Masque Awards were presented for the 1957-1958 season with “Cat on a Hot Tin Roof” winning the award for Best Play.

During the run of all six productions in their 2015-2016 season, all Kentwood Players members voted by secret ballot in several artistic categories after seeing each show. The votes were tallied and Kentwood Players presented their annual Marcom Masque Awards to the winners in each category. This year, a new category “Season Subscriber Favorite Show” was added, allowing Season Subscribers to vote by secret ballot on each show’s production quality as a whole after seeing it. The 2015-2016 season included 4000 Miles, Brighton Beach Memoirs, Ravenscroft, Something’s Afoot, A Raisin in the Sun, and Man of La Mancha.

Please visit their website at www.kentwoodplayers.org for more information about Kentwood Players including their current production Olive and the Bitter Herbs, a comedy by Charles Busch opening July 8 and upcoming auditions for the murder mystery thriller “Wait Until Dark” on July 9 and 10, 2016. You can also find Kentwood Players information on Facebook and Twitter.