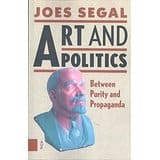 Dr. Joes Segal is in charge of curating exhibitions that highlight selected items from the two million Cold War artifacts stored in Culver City’s Wende Museum, revealing the issues, daily lives and conflicts in that confrontational era that threatened to launch the world into atomic warfare following the Second World War.
He has also found time to write a book about the history those two million items represent, discussing their relation to the era and to current times. The museum will launch his work, “Art and Politics: Between Purity and Propaganda,” on this Sunday, June 26.
While art and politics appear worlds apart, Joes’ seven essays relate the unrelated, pointing out that artists at philosophically wide remove from governments nevertheless took commissions from and created art for them.
Artist Diego Rivera, an avowed Communist, produced art for conservative Mexican politicians as well as American capitalists. Other artists, like Jackson Pollock, had their work embraced by widely divergent groups like the free democratic West and Communist leaning groups. The way artists themselves were portrayed is a record of the role of art in politics.
Joes’ essays explore the theme of how art has been treated by artists, historians, critics, politicians and even secret services in the Twentieth Century. Copies will be available and he will be in attendance to sign them from 4 to 6 p.m. at 5741 Buckingham Parkway, Suite E.
Park in designated spots or on the street. RSVP at [email protected]