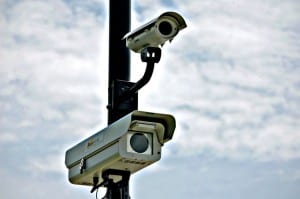 A while back, I was driving back from a wedding with my beloved daughter, who was back in town for a few days. We were laughing about something as we came off the freeway at Slauson, and I stole a glance at her, because there’s nothing more beautiful than her face when she’s laughing.

Out of the corner of my eye, I saw the light at Green Valley Circle turn yellow. In the next split-second, here’s what went through my mind, “it’s late, there’s no one around, I’m tired, I don’t want to jolt us, let me just goose the accelerator here, instead of clamping on the binders.”

When the flashbulb went off, she said “Hey dad, what was that?”
“I think we just got a ticket.” In retrospect, I can’t help but notice that “WE.” As if she had something to do with it.

I explained to her the mechanism of the red light cameras, and started to talk about all the ways they could malfunction… but young women these days seem to see self-justification coming from a mighty long ways away. I got “the look,” and I shut up.

It was a long, sleepless night. I worked on the marvelous story I was going to tell the judge that would reduce him to tears and lead him not just to forgive my ticket but actually pay me money for my inconvenience, But when I went to write it down as the sun came up, I kept wondering how I was going to sell it to my daughter. What lesson might she take away from me beating the ticket?

There are two hotels right near the intersection of Green Valley Circle and Slauson. What if there’d been a wedding at one of them that night? What if another fellow, just like me, had been leaving that wedding with HIS beloved daughter, laughing and talking, and glancing at each other? What if maybe he was one of those guys who prided himself on “timing the lights,” watching for the yellow on the cross street so he wouldn’t have to slow down, wasting his time and hey, wasting gas, too? A clever guy, just like me?

Which of us would be in the emergency room this cold dawn, waiting for the doctors to come out with that horrible stony smile? Which of us would spend the rest of our lives rationalizing that instantaneous monumentally stupid decision?

I love red light cameras. Every time I see a yellow light now, I just put my foot on the brake. Life’s a lot simpler that way. I may lose a whole three minutes a day at an intersection.

Yep. What he said.