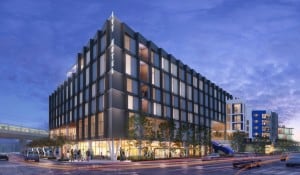 A giant mixed-use develpoment proposed for the space next to a train station won all the praise from Los Angeles city planning commissioners Thursday, June 9 . One said it has “all the bells and whistles;” another said “it is just one excellent project;” and another said she wished it were bigger.

The Ivy Station project will be made up of a trio of buildings on five acres immediately next to an Expo line station near downtown Culver City.

The proposed project at the intersection of Venice, Washington and National boulevards will consist of: a five-story office building with 210,445 square feet, a six-story hotel with 148 rooms, and a six-story apartment building with 200 units. Each of the three buildings will have shops and restaurants on their first floors, and combined, there will be 1,555 parking spaces.

Right now, the land is mostly surface level parking, including 500 spaces are for the Expo line. The project will eliminate 200 of them.

Ivy Station will rise so close to the light rail that renderings show Expo line trains in the background.

Here are some of the cool features that wow’d planning commissioners:

More than two acres of open space
A widened National Boulevard to accommodate new bike lanes in both northbound and southbound directions.
A bike hub
More than 200 bike spaces
A central plaza and “great lawn” will serve as venues for events and programs.
Half of all employees of tenants in office spaces with more than 20,000 square feet will get free TAP cards for one year.
Of course, it’s a development project, so not everyone is pleased. From Ken Mand, who writes about Culver City:

As we, the [Culver City’s’] Arts District Residents for Responsible Development, see it, the city has not fully analyzed the impact of this project, and the cumulative effect of all the Washington/National projects on our neighborhood, as they relate to traffic, parking, ability for our fire and police to provide emergency response during bumper-to-bumper rush-hours, and demand for services at Syd Kronenthal Park and the nearby elementary school, Lin Howe.
The project has cleared the approval process in Culver City and awaits final approval from LA. The Planning Commission’s vote Thursday to approve permits and environmental review documents brings it one step closer.