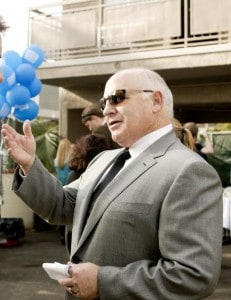 “We are honored to have Andy join our Board of Directors, his commitment to public and civic service is a great asset for the organization, community and the vulnerable families that it serves,”notes Christine Mirasy-Glasco, Executive Director of Upward Bound House as former Culver City Mayor Andrew Weissman joins the Board of Directors of Upward Bound House, a county-wide non-profit organization that serves homeless families.
Weissman, who served on the Culver City Council from 2008 until being termed out in 2016, including two years as mayor of the city, has devoted more than three decades of service to the city.
Prior to being elected to the City Council, he served on the city’s Planning, Civil Service and Human Services and Parks Commissions. He also served as the president of the Downtown Business Association and a member of the city’s Homelessness Ad Hoc Committee.
Weissman chaired the city’s Charter Review Committee as well as the Yes on Measure V campaign. Measure V was overwhelmingly approved by voters in 2006 and resulted in sweeping changes to the City Charter that instituted ethics provisions for the first time and streamlined government efficiency.
He has also served as a member of the Bio-Ethics Committees at both Washington Medical Center and Brotman Medical Center, past president of the Culver City Convention & Visitors Bureau, past chairman of the board of managers at Culver-Palms Family YMCA, past chairman of the Fiesta La Ballona Committee and board member of the Rotary Plaza senior citizen housing project.
“I was pleased to support the Upward Bound House proposal for a new location in Culver City when I served on the Planning Commission,” he said. “It has been a pleasure to see how this organization has grown and the positive impact it has made on homeless children and their families.”

Weissman has been honored by a number of organizations. He earned the Community Architect Award from the 49th Assembly District, the Community Achievement Award from the Independent Order of Foresters, the Good Scout Award from the Boy Scouts of America and the Citizen of the Year Award from the Culver City Chamber of Commerce, which has also honored him with the President’s Award twice.
He is a graduate of Culver City High School and earned his bachelor’s degree from California State University, Northridge and his law degree from Loyola University School of Law.
Weissman lives in Culver City with his wife, Doneil. He has two children: Adam and Lauren; and five grandchildren: Luke, Jake, Cambria, Ava and Ori.