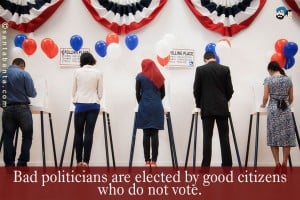 You need to go and vote. If you are not sure who or what choices to make, advice is here.
About the Democratic Nominee for President of the United States; you have you mind so firmly made up that nothing could influence you. So do that. But your task is not completed. You must vote for many other offices, because ignoring the down ballot races and issues is what leads to things like Mitch McConnell.

Representative of the 37th District, you need to vote for Karen Bass. I have noted in the past that she was not very responsive to Culver City, but she has truly upped her game, and I respect that.

Member of the State Assembly – you do not need to vote. I rarely do this, but this one is a lose/lose. I endorsed Sebastian Ridley-Thomas when he originally ran, and I have since come to regret that. I have not heard one positive thing about him from any Culver City voter, have heard many negative things, and when I was in Sacramento with the PTA, he did not even respond to the invitation to meet. It takes a very special kind of arrogance to flip off the PTA. If you are the kind of voter who would consider voting for a Republican, this is the moment to consider that. I am not that kind of voter.

The Judicial – I source judicial recommendations from three places, and for the most part, they were in agreement. When they were not, I went with the majority recommendation. Because, democracy.

State Measure 50 – That’s a yes. Suspended should mean without pay and benefits, or it’s kind of like a vacation.

Now, begin getting used to the phrase “Madame President.” And, prepare yourself for an amazing shitstorm of misogyny coming from both the expected and unexpected places.  November is coming, and we will get there.