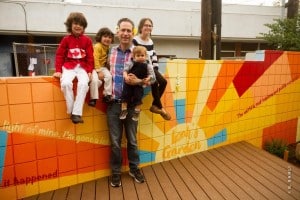 Dozens of neighbors, classmates and teachers gathered together on Wednesday evening, June 1, 2016 to participate in the dedication of Leah’s Garden on the Lin Howe campus. Leah Nico, a beloved mother of four with children at both Lin Howe and CCMS, passed away on October 1, 2015. Leah’s Garden is the fulfillment of her dream to turn Lin Howe’s kindergarten yard into an outdoor classroom and inspirational play area.

Leah had imagined this Outdoor Classroom for several years, and was hoping to implement her ideas during this school year. After Leah’s sudden passing, another Lin Howe parent, Jennifer Conlon, designed the space as Leah imagined it, and spearheaded its construction. Leah’s Garden includes a multi-level deck/stage area, a sustainable garden and a sunrise inspired mural that includes some of Leah’s favorite poems and quotes. Sony Picture’s Greener World Grant helped pay for the materials and construction of the stage and landscaping. Sony also sent nearly 100 of their employees to volunteer one April morning for their Sony Global Volunteer Day to paint the murals in Leah’s Garden, as well as other murals and planting around the campus, all of which were designed by Lin Howe parents.

Lin Howe Principal Dr. Kim Indelicato opened the dedication ceremony by welcoming everyone. A former Lin Howe teacher, Joey Taylor, followed with some memories of Leah, and poetry that commemorated her love of both Mother Earth and her community. “Leah made Lin Howe a better place for all the children. May we all love and guide the students of Lin Howe with our arms open wide.”

Lin Howe Boosters President Patrick Meighan closed the ceremony by crediting Leah with helping to create the school’s robust Boosters Club. He recounted her extraordinary ability to connect people, and to persuade others to volunteer at the school.

Daisies were handed out to everyone in the crowd. Leah’s husband, Dave Hatch, and four children were on hand for the ceremony. Leah’s third child, Chauncey, will be attending kindergarten at Lin Howe this coming fall, and will get to play and learn in his mother’s garden