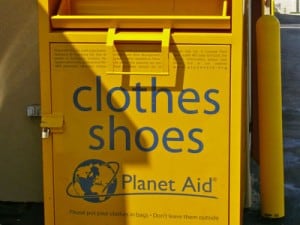 It’s there and it’s easy – the parking lot of the Y, the shopping center corner – and the bright yellow box invites you to donate used clothing.  Most people who’ve heard of Planet Aid know it as a charity operating yellow used-clothing collection boxes. But there’s a shadow- charity watchdog groups and America’s most prominent used-clothing-focused nonprofit say Planet Aid is something else entirely: an organization that tricks the public into making donations that achieve very little charitable benefit.

The American Institute of Philanthropy consistently has awarded Planet Aid an F rating, saying the tax-exempt nonprofit spends the vast majority of its income on expenses.

In a January article titled “Planet Aid’s ‘Recycling’ Program Debunked!,” the charity watchdog said the group counted collecting and selling used clothing as a “significant contribution in the fight against climate change” – because less energy is expended when manufacturing new clothes.

Used clothing also is a lucrative market worth $4 billion in global export trade, according to Andrew Brooks, a lecturer in development geography at Kings College London. Brooks did his doctoral thesis on the Africa used-clothing trade.

Planet Aid is one of at least seven U.S.-based nonprofit organizations, and two or more U.S. for-profit companies, that have been linked to a secretive Danish organization known as the Teachers Group. Each benefits directly or indirectly from the used-clothing donation boxes that have become ubiquitous in American cities and towns.

The Gaia-Movement Living Earth Green World Action USA Inc. in Chicago is one of those Teachers Group-linked charities. Its officers include Danes connected to other charities in the Teachers Group network. Gaia’s latest public filings in 2013, for example, say its chairwoman is Josefin Jonsson. She also was a founding director of Planet Aid and of the Danish IFAS foundation, which Danish prosecutors allege Teachers Group leader Mogens Amdi Petersen used as a vehicle for embezzlement and tax fraud.

Back in October, the American Institute of Philanthropy published an article about Gaia, too, saying only 2 percent of its expenses went to programs. It tried to disguise its 98 percent overhead from the public, the article said, by claiming costs from collecting and processing donations as an environmental program expense.

“It is ridiculous for this charity to assert that items worth millions of dollars would end up in a landfill if GAIA did not collect them,” it added.

Goodwill Industries International, the used-clothing giant focused on job training for people with disabilities, has an A rating from the American Institute of Philanthropy. Local branches in several communities around the U.S. have alleged that Planet Aid and other Teachers Group-linked collection boxes amount to unfair competition.

“These boxes are owned by an international for-profit corporation that makes money from the sale of donated goods,” according to a 2014 statement from Goodwill Industries of North Central Pennsylvania cited in the journal Nonprofit Quarterly.

Planet Aid’s attorneys and a spokesman have dismissed the criticisms as unfair attacks of a competitor.

Planet Aid set up operations originally in 1997, registering in Massachusetts to put used-clothing drop-off boxes “in residential areas, shopping areas, college campuses and transfer stations,” according to its incorporation filings. According to the filings, the idea was to provide funds to the humanitarian relief organization Development Aid from People to People Angola, another group linked with the Teachers Group.

Britta Junge ran DAPP Angola projects from the organization’s main office in Luanda until 1995. Junge says she was under orders from Petersen to maximize the siphoning of funds from donations and used-clothing sales into offshore accounts held by the Teachers Group. She kept in contact with Teachers Group friends after she left, and she said she is certain Petersen’s orders remained the same: maximize profits coming out of ostensible charity operations.

Today, Planet Aid operates clothing donation boxes in more than 20 states. In 2014, it declared $41.2 million in “Private and Other Support,” according to the latest available figures submitted to the United States Agency for International Development, or USAID. That year, Planet Aid reported $6.4 million in revenues from U.S. government grants.

The Teachers Group also operates a private, for-profit clothing box company, which it spells U’SAgain and pronounces “use again.” Other linked private companies include Garson & Shaw LLC, an Atlanta-based used-clothing broker that operates a branch office at an address in Belize for another Teachers Group affiliate, Humana People to People, and TS Recycling, a holding company that shares a Chicago address with U’SAgain.

Each of these organizations is registered in the U.S. as independent, with their relationships to other Teachers Group organizations purportedly limited to a loose affiliation with Humana People to People. But a dozen ex-Planet Aid area managers and employees interviewed by Reveal from The Center for Investigative Reporting said the various clothes-recycling groups are far from independent.

“It took me awhile to realize they were part of the same organization,” said former Planet Aid area manager Robert Harms, who recalled going to a pep rally-style meeting at Garson & Shaw’s Atlanta office, where he encountered representatives of companies he had thought were his competitors. “I was thinking: ‘This is really strange.’”

If you have used clothes, keeping it local will do much more for your community – The Culver Closet at CCUSD, Timeless Treasures on Culver Boulevard,  Love the City Thrift on Sepulveda Boulevard will all put your used goods to good use.