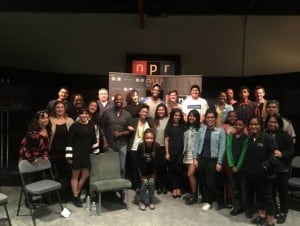 What do you get when you bring together Young Storytellers alumni, entertainment industry professionals, and thought leaders to discuss representation in the media at National Public Radio West? A truly inspiring NPR Generation Listen event, that’s what!

A movement to connect NPR with younger audiences who share the same curiosity about the world and a passion for creating a more informed populace, Generation Listen shares the Young Storytellers belief in the transformative power of stories.

Culver City High School didn’t quite know what to expect when it decided to gather its community this week for a Listening Party, where the CCHS group would listen to a few NPR stories about a focused topic (diversity and representation in the media) and then have a discussion about the themes covered. CCHS was lucky enough to be joined by the two NPR reporters whose pieces the group listened to, Mandalit Del Barco and Shereen Marisol Meraji.

The wide-ranging discussion hit on crucial questions facing CCHS’s Young Storytellers as they navigate the world today: Who gets to tell someone else’s story? Why are stories important when it comes to issues of diversity? What is the value of stories not everyone can understand or relate to? From folklore around Dia De Los Muertos to the gems of Steven Universe, no form of media representation was left unexplored.

CCHS is grateful to Generation Listen and NPR West for giving our young people and their families the opportunity to be heard on these issues and to hear from storytellers working in the media.