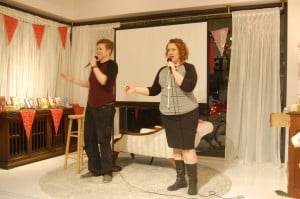 So began the first monthly Romantic Comedy stand-up night as introduced by co-host Jenny Chalikian. The evening, which showcases six comics (a mix of men and women) over the course of two hours, as well as the comedic musings of hosts Chalikian and Erin Judge, (pictured above)  is nothing unusual for Los Angeles in form. But its venue — an airy, pink confection of a bookstore that only sells romance novels — sets it apart.

Bea and Leah Koch opened the Ripped Bodice, a “feminist business,” in Culver City two months ago. The proprietresses, in their effusive warmth and ability to finish each other’s sentences, mirror great sisters of literature — they pair the business acumen of the Brontës with the devotion of Austen’s Dashwood sisters.

Their store, inspired by Bea’s graduate thesis, “Mending the Ripped Bodice,” is an extension of their enthusiasm for all things romantic. “Our ultimate inspiration is, of course, Meg Ryan, and The Shop Around the Corner,” says Leah. With Nora Ephron’s You’ve Got Mail as a muse, it’s fitting that the store is now home to a comedy night.

Creating a community gathering space for women has been a part of the Koch sisters’ mission from the beginning. Shortly after the store opened, comedians Erin Judge and Jenny Chalikian approached the sisters with the idea for a monthly stand-up night to feature a range of comic talent, from up-and-comers to more established comedians, with the perks of free wine and a 10 percent storewide discount.

Judge, a romance author herself, felt she had found the perfect venue in the Ripped Bodice. The Koch sisters jumped at a chance to feature one of their favorite art forms outside of fiction. “We don’t go to a ton of concerts, we’re not live-music people, but we go see a lot of stand-up comedy,” Leah explains.

The first event, on Thursday, April 21, was packed with nearly 50 people in their 20s to their 60s, and the jokes ranged from ribs about women awaiting Mr. Darcy to raunchy observations about the impracticality of women’s underwear. The comedy is female-centric but women aren’t the butt of the joke.

Guy Branum, headliner and writer for The Mindy Project, remarked upon the “distinct pleasure of being in a space full of erotica by and for women because it’s just so clean and nice.” Chris Garcia joked, “When Hillary’s elected, what if she remodels the White House to look like this store — some Fabio here, some Bechdel over there?” The comedians reveled in the store’s femininity, from its pale pink receipts to its delicate antique furniture and richly upholstered chaise lounge.
“There’s a lot of bookstores that do have this masculine feel to them,” Leah explains. “It’s a little weird to be standing in this hyper-feminine space. People just aren’t used to that being a public space.”

The privileging of the feminine has not escaped the appreciation of customers and audience members. Chelsea Doust, a member of a group of local moms attending the comedy night, identified the store as a new type of space for women to gather. “I think it’s one of the few places [in Los Angeles] that is female-centric without being over-sexualized,” Doust said. Another guest, Evelyn Wu, remarked, “There’s not a lot of woman-friendly spaces in any city, so to have this is really special and unique.”
The romance community is inherently feminist, with its ability to provoke conversations concerning female desire and sexuality. Yet the genre is often derided as being “trashy” or “tawdry.” The Koch sisters aim to embrace this dichotomy with their store’s atmosphere and events calendar, which includes a Mother’s Day Tea and the launch of several book clubs. The store reflects their core values, learned from their late mother. As Bea explains, she taught them through example “that being a mother and a very feminine presence, and being a feminist, was not mutually exclusive.”

From a comedy night addressing the vagaries of the libido, to its bathroom full of Gilmore Girls posters, the store champions this seeming contradiction. “We’re not apologizing for how feminine it is because we don’t feel like we have to or should,” Bea says. The Koch sisters have made themselves the heroines in their story and in so doing created a space for other women to create and celebrate their own narratives, comedic or otherwise.

The next Romantic Comedy show is scheduled for Thu., May 19, at the Ripped Bodice, 3806 Main St., Culver City; therippedbodicela.com.