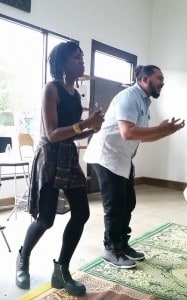 People strolling by the Compound Salon on Washington Street Sunday afternoon did a double take, and then stopped and stared. Instead of the usual chairs lined up with women waiting for the appointments, there were drums, amplifiers, microphone and tall bar chairs in the waiting area and the salon floor was carpeted with a collection of old and new rugs, cushioning the bottoms of 30 or so twenty- and thirty- somethings, sitting cross legged on the floor, staring at their cell phones or chatting while they sipped beer and wine. SofarLA, the global music network was hosting a house concert.

Sofar is a concert production firm based in London that works with local volunteers and paid staff to produce house concerts – often held in small businesses like Compound Salon – in over 200 cities around the world. The Local branch, knows at SofarLA puts on 10 -12 concerts a week from Malibu to Boyle Heights, bringing both rising and established artists to audiences in quiet, listening-focused environment.

Sofar limits the number of people at a concert to between 30 and 40, does not allow talking during the music, requests that cellphones be used only for posting pictures of the artists, and asks people to stay for all three acts. Audience members bring their own beverages, cushions, and snacks; SofarLA staff and volunteers set up the room, bring in sound and video equipment, and lavish food, drink and love on the bands.

Sunday’s entertainment was the usual SofarLA eclectic mix – Peter Verdell of the well-established LA-based ActAsIf band, spoken word poet Matthew Cuban, and the six-member Philadelphia alt folk/rock/ jazz group Tutlie, stopping for a couple of gigs in LA on the debut national tour. Each act did 4 songs or poems and there was one intermission while the last act, Tutlie, set up. Afterwards, bands chatted, sold CD’s and merchandise and autographed albums, as the party spilled out into the street.

Culver City is a frequent location for SofarLA concerts, with the World Arts venue 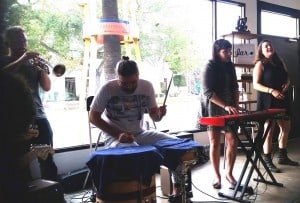 in the industrial areas north of the Metro Station being an ideal location. Other SofarLA Culver City gigs have included a ‘for lease’ apartment building and a private home. Concerts are easy to attend – no velvet rope, no long line at the door and no $20 parking fees or drink minimum. Anyone can pay a small fee in advance for a guaranteed place or just RSVP to an email and get there early enough to grab a spot. All concerts are BYOB. The more ambitious fans can offer their homes for a concert or volunteer. Register at www.sofarsounds.com/la. It’s free.

Get more from Patrick O’Heffernan