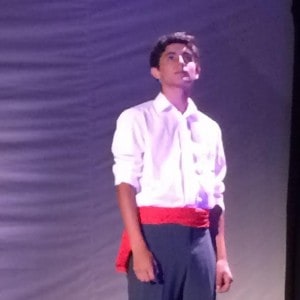 Don’t live your life UNDER THE SEA, come SEE Culver City Middle School’s Student-Run production of THE LITTLE MERMAID tonight and tomorrow at Robert Frost Theatre! There will be three performances: Friday at 7pm, and Saturday at 3pm and 7pm. Your $10 admission will go toward next year’s production costs.

Why is this production different from all other school productions?

The Little Mermaid. The Wizard of Oz. Seussical. Once on This Island. Catching Butterflies. FIVE productions staged by Culver City Middle School students: 2016, 2015, 2014, 2013, back to 2012. Fall of 2011 was when I had the audacity to believe that 11-13 year olds might possess the ability to stage plays without an adult. Here we are, five years later, and the show still goes on!

At the time, I noticed that many of the 200+ “GATE” designated students at the middle school supplemented their academic lives with extracurricular arts activities such as: playing an instrument, participating in an improv group, singing in a choir, joining a dance studio, or winning district-wide visual arts competitions. At the end of the 2010-2011 school year, I saw what turned out to be the last after school theatre class’ production: Joseph and the Amazing Technicolor Dreamcoat.

That fall, a student from the show, Mariko Rooks, showed up in my homeroom. 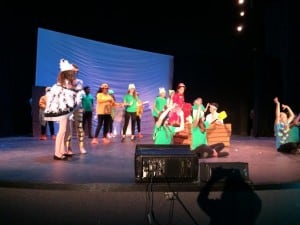 I recognized Mariko in my capacity as GATE Coordinator for the school. She lamented one day that there’d be no further productions; the parent volunteer who led the class had moved away. I suggested that Mariko produce a play herself. She questioned my sanity.

Five years and five plays later, the kids are still at it. Mariko is now a Junior at Culver City High School. Rika Nagai and Kacey Oschack, this year’s producer-directors, weren’t even at the middle school when the idea for this program was hatched. The fact that there is still a show at all, through changes in administration at the school, predecessors moving on to high school, and the cyclical changes that inevitably occur in education is as remarkable as the notion of a student-run production itself.

Part of the beauty is the concept of succession. Mariko discovered her replacement in Isa Berliner. Isa, now in 9th grade at CCHS, took over from Mariko as producer and director of Seussical and The Wizard of Oz, adding choreographer, voice coach and actress to the job description. When I went to visit the “hell week” rehearsals in Robert Frost earlier this week, I found Isa sitting quietly watching rehearsal; she had just stopped by to look in, but her presence had an effect; everyone upped their game, wanting to show off for their mentor. When I asked Kacey and Rika how they knew to do what they were doing, they chimed simultaneously: Isa. They had both worked for the past two years in Isa’s productions of Seussical and Oz as actors. Now, both in 8th grade, they assumed roles as overall producers.

I sat in the dark theatre hearing Rika’s voice ring through the theatre, “More articulation,” and “let’s take it from the top.” I watched Kacey demonstrating the choreography and giving directions to other cast members. I asked the girls how long they’d known each other. Kacey is a graduate of Westwood Charter Elementary school, and Rika went to El Marino (Japanese) Language Immersion School. They’d met in 6th grade, and I take credit for the pairing, although I never had either girl in any of my classes. From that first year with Mariko, I’d proposed and succeeded in getting approved a period of the day, four times a week, where students could work together on student-run productions. The overall program was called “AEIOU,” but Mariko named the particular group “Performances.” They nonchalantly told me, “We met in 6th grade in ‘Performances.'” I felt that the thing I’d created was now a child’s middle school memory. Not, “we met in Math class,” but, “we met in Performances!”

The two both auditioned and were chosen to be part of the cast of Seussical, and both had major roles in The Wizard of Oz; Rika was Good Witch Glinda, and Kacey played a variety of roles, most memorably Oz, gender-bending her former Seussical role as well. Isa identified the two already last year as having what it takes to be producer-directors. The two started working together the summer before this school year began, first choosing the material, settling on The Little Mermaid. When the school year began, they hit the ground running with the biggest decision already made; auditions were held in late September.

Although there is no adult leader in the process, such young students still do need adult support. When I moved on to my new position with Culver City Unified’s Alternative Education Schools (Culver Park High School, Culver City Adult School and CCUSD’s IAcademy), CCMS Counselor Jeanine Lizotte, my partner in crime for the previous productions, and 7th grade English teacher Brianna Capillo, who understood my vision and passion for student-run productions, stepped in to serve the students’ needs during and after school. Capillo has selflessly supervised the students during “hell week” for the past three years, a near 24-7 challenge that a show with a cast and crew of middle school students entails.

GATE students are drawn to these productions, but the plays have never been populated solely with GATE students. The shows have always had open access auditions, but 60-80 students has shaped out to be a manageable amount of people to do the job. The process of putting on shows like these utilizes every aspect of what educators fondly refer to as “critical thinking skills.” There is virtually no other activity imaginable that marshals every bit of intelligence, every morsel of creativity, not to mention aspects of every secondary level subject, from English and art – it goes without saying – to math, science, social studies and PE.

As every year, the cast and crew is made up of 6th, 7th and 8th graders working together. Noa Aoyagi and Emiko Oku lead the crew. The entire ensemble is notable, but stand outs I saw at rehearsal include: 6th graders Ella Schilling as Flotsam and Payton Hodur as Jetsam, 7th grader Julia Gomez as Scuttle, who has been short-listed as a candidate for Producer-Director next year with “Ellie” (I couldn’t catch her last name in time for publication). When I asked Rika and Kacey what they saw in a Julia and Ellie, I was told, “they stay on top of tasks, they can put people together and they can rise above and be serious.” The biggest challenge is just that, rising above. Without the benefit of age, credentials or official title, it was up to Rika, and Kacey, and their predecessors, to figure out how to assume leadership. It is an organic effort of teamwork. As Rika told me, “I love goofing off with my friends, but here, it’s not about friendship. When we take on the role of producers, we have to change our faces, and our voices, so they know we’re being serious. We have to have two faces, sometimes.”

Other challenges include finding time that everyone can work together. Originally, the students had two hours a week of during school time, which was reduced last year to a mere half hour per week, on so-called “Fun Fridays.” This isn’t “fun,” it’s enrichment, but the school schedule had been altered to favor remediation over enrichment. This might be the topic of a future Ruth’s Truths, if I can ever steel myself to write about it. The students were ultimately given the concession of also working after school on early-release Wednesdays, the school paying a teacher to supervise for safety.

I have come to understand that all stage productions are a culmination of hours of hard work, supernatural creativity, unbridled talent and a few miracles. It is always miraculous to see the bits and pieces of the rehearsals come together when an audience has been seated. But this time, there’ve been more wonders already. The students had planned to use video images behind the actors as set design. They found out on Tuesday night that the plan would not work with the lighting provided by CCHS junior Merrick Padilla, Seussical and Wizard of Oz crew veteran and technical magician. On Wednesday after school, a huge white truck showed up in front of Frost, and out swam Mermaid appropriate set decorations! Perhaps a benefit of living here in Screenland, a cast member’s dad was able to scare up props from a cancelled series he’d worked on.

I’ve written about these productions before, but as delightful as they are to see, if you can begin to fathom what the students have accomplished in order to produce these shows, the word unbelievable does not suffice; learn what student achievement really means. Come ford the Fathoms Below, Under the Sea, and take a Tour of the Kingdom.