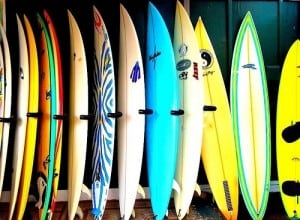 It’s been more than half a century since LA had a rail line that traveled all the way to the Pacific Ocean, but all that is set to change with the May 20 debut of Expo Line’s extension to Santa Monica. Along with the new train line to the sea, Metro now also has a potential new crop of riders it hasn’t really had to deal with before: surfers.

Budget-conscious and environmentally-friendly surfers alike will soon have a public transportation option for getting to and from the beach, forcing Metro to make an official ruling on whether surfboards should be allowed on the Expo Line. According to the Santa Monica Daily Press, surfers looking to catch a wave/train will “fer sure” be stoked with Metro’s ruling. The Expo Line will officially allow surfboards on board. Bitchin’.

The only catch is that Metro commuters will take precedent over boards. If the train is full, surfers have got to wait for the next one, just like the existing rule for bicyclists. As of now, Metro’s code of conduct only mentions bikes, but in the most LA news that ever was, Metro officials say they will be adding surfboards into the language of their safety codes.

Metro doesn’t anticipate a huge surge in commuting surfers when the Expo Line extension opens. Many of the most experienced surfers are practically already in the water before the first Expo Line leaves Downtown at 4:54 a.m., and then there’s the long walk from the Santa Monica station at Colorado Boulevard to the ocean.

But who knows, maybe there’s a whole crop of carless surfers hidden Downtown just waiting to shred the gnar on a budget, Metro pass tucked firmly into their wetsuits. If too many surfboards on the Expo Line does become a problem, may we be the first to suggest Metro simply start strapping boards to the top of the train?