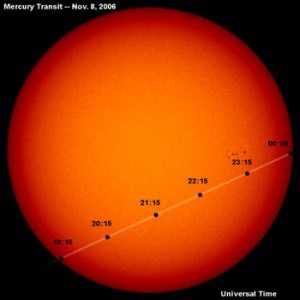 NASA is inviting viewers around the world to see a rare celestial event, with coverage of the transit of the Sun by planet Mercury during the morning of Monday, May 9.

Mercury passes directly between Earth and the Sun only about 13 times a century, its last trek taking place in 2006. Viewing this event safely requires a telescope fitted with a solar filter.

NASA offers several ways for the public to view the event, including images on NASA.gov, a one-hour NASA Television special, and social media coverage.

Mercury will appear as a small black dot as it crosses the edge of the Sun and into view at 7:12 a.m. EDT (4:12 a.m PDT). The planet will make a leisurely journey across the face of the Sun, reaching mid-point at approximately 7:47 a.m. PDT, and exiting the golden disk at 11:42 a.m. PDT.

CAUTION! NEVER LOOK DIRECTLY AT THE SUN WITHOUT A PROPER SOLAR FILTER, AS THIS CAN CAUSE SEVERE EYE DAMAGE OR BLINDNESS!

Images from NASA’s Solar Dynamics Observatory (SDO) will be posted at www.nasa.gov/transit

NASA also will stream a live program on NASA TV and the agency’s Facebook page from 7:30 to 8:30 a.m. PDT—an informal roundtable during which experts representing planetary science, solar physics, and astrophysics will discuss the science behind the Mercury transit. Viewers can ask questions via Facebook and Twitter using #AskNASA.

VIEW THE TRANSIT FROM MT. WILSON. Mount Wilson Observatory, located in the mountains above Pasadena, welcomes you to see Mercury as it travels across the face of the sun on Monday, May 9. The transit will be visible at sunrise at 5:56 a.m. and continues until 11:42 a.m. Observatory gates will be open at 5:30 a.m. and visitors will be welcomed into the observatory to observe Mercury and the sun with various solar telescopes including the observatory’s 150 Foot Solar Tower and the Snow Solar Telescope.

In addition, the Cosmic Café on the Observatory grounds will be open to sell food, drinks, and souvenirs. Tours will be offered to see inside the domes of the 60 inch and 100 inch telescopes, each the largest in the world at the beginning of the last century.

A $10 donation at the gate is suggested for this event.

The last time Mercury transited the face of the sun was in 2006. The next time a transit of Mercury will be visible from Los Angeles is in 2019, then again in 2049. Don’t miss this chance to see it.

Mount Wilson Observatory is located 19 miles from La Cañada Flintridge in the San Gabriel Mountains. Take Angeles Crest Highway (Hwy 2) east for 14 miles to the Red Box/Mount Wilson road, and turn right. The Observatory is 5 miles up the road. A map is available at the Observatory’s website at www.mtwilson.edu/vis/map.pdf.

Follow updates to this event and ask your questions at the Mount Wilson Observatory Facebook page: www.facebook.com/events/1713781242238389/

In the event of rain or heavy fog, which will cancel the event, the Facebook page will have the status of the event. May is often cloudy in the LA basin, but the observatory is usually above the marine-layer clouds. Check the weather at the Mount Wilson Towercam page (obs.astro.ucla.edu/towercam.htm) before you come up.

This event is hosted by the Mount Wilson Observatory with support from the Los Angeles Astronomical Society and The Planetary Society.