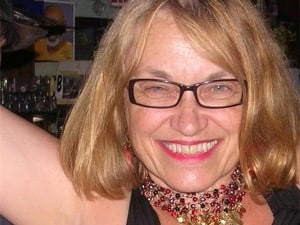 Our community lost Kari Fretham on my 57th birthday last December. Her 68th birthday would have been this past Tuesday, April 26th, and we commemorated it on Facebook. We had vowed to do something special together on her birthdays from now on, but I think we’re all still too raw to do it now. I know I’m not ready.

Kari tended to make a big deal out of birthday celebrations; a year after I met her on the job at Culver City Middle School, we happened to get together for an impromptu drink and snacks at my house. Kari revealed that it was actually her birthday that day. It was the one year she’d made no special plans, and she appreciated the serendipity of being invited over for no particular reason.

A couple of years later, as her 60th approached, she planned every detail of the birthday, and invited only a few special guests, including me. Months prior we accepted due-dated invitations to a special restaurant she’d reconnoitered; an Italian place on the Santa Monica promenade. All gals came stag, and I wasn’t even in a relationship at the time, but Kari gave me a special dispensation to bring along a male friend I’d spoken of frequently. The other gals were like, “why’d she get to bring someone?” But Kari, single at the time, didn’t want everyone arriving as if alighting Noah’s Ark. Still, she allowed me to bring this guy, I think because she got a kick out of the idea that I considered her birthday to be such an important event in my life as well.

Kari perseverated (a favorite word of hers) about a particular ring she had found to wear that night, and how she was planning an entire outfit around that ring. It had an orange-red bakelite flower on top. She found a pair of her inimitable platform sandals to wear with it. We buried her with that ring.

Kari liked platform sandals because they lent her height and allowed her to paint toenails to match whatever outfit. Kari did not go for pedicures, instead, she painted over the prior color when she was in a hurry. Every day’s outfit, put together from a mish-mash of thrift store purchases, was a study in matching colors and/or patterns. Black and white, red and lime green were most prevalent in her closet. For the casket, we went with red and black.

Kari had a big personality; you always knew what she liked and didn’t like. To this day, I could order off a menu for her. I am emboldened by the understanding that, for good or for bad, big personalitied people are those you remember best posthumously. Kari walked and talked with a seriousness of purpose; whether at a lunch meeting of English department teachers, a power walk along Ballona Creek, or a girl’s night out over wine and appetizers. Every encounter with Kari became a special occasion.

The hard thing about losing a friend comes from the fact that your expectations from friendships are different. As much as we like to call our friends “family,” they really are not, because there is no expectation to hang together no matter what. At any time you can become irreparably estranged from a friend. There was a time w hen Kari and I were on the outs for a while. As I said at her funeral, I always felt she was the boss of me. Kari had been assigned to me as a mentor teacher during my first year on the job, and she took on that role in a nurturing way. At one point, she felt I was becoming too co-dependent: a thing she combatted feverishly. She thought I’d grown too accustomed to consulting her, and wanted me to take on a more proactive role in listening to her as well. We took a short break, but eventually found our way back to each other. Another friend was alarmed during the hiatus; she’d ask, “are you and Kari good now?” And was relieved when we finally were again.

We talked of driving to the Bay Area, and going back to Italy, and, bible aficionado that she was, I knew she’d love Israel. We didn’t get to do any of that, but one destination that did materialize for us was New Orleans, and it couldn’t make for a better memory. Being with Kari in that musical, literary and culinary capital was magical. I can still see her walking through the streets giving dollar hills to the buskers, walking us from Bourbon Street to Treme, and chatting up the waiters and waitresses who served us our soul food.

Back to birthdays, one year she made me a work-birthday party at her house. She arranged for one colleague to bake me a homemade cake, and invited staff-friends who came bearing gifts. When we discussed plans for future special occasions, and even not-so-special occasions, she’d bring out her calendar.

Everything had to be calendared. As I was telling colleagues today, she was one of the few teachers who planned out her entire year before school began; she could give you an idea of when she’d be having her students read House on Mango Street and what art projects would be integrated into the curriculum. She used to get beautiful “family roots” projects out of the students and display them on her walls; she’d have the kids bring in food from their respective cultures and eat it in front of us at our lunch table. I wanted to copy the assignment, but Kari forbid me to do it. I taught 7th and she taught 8th, and she didn’t want me stealing her thunder. The one year I finally got to teach 8th grade I found that her same assignments didn’t come out as well in my hands. Her seriousness of purpose transmitted to the students and her colleagues.

To be ‘inimitable’ is to be unable to be imitated. That was Kari.