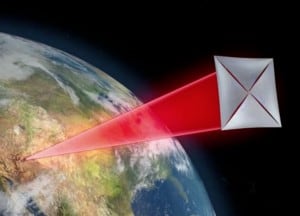 No, it’s not Star Trek yet, but it could be a way to reach the stars within the lifetime of many of us.

The initiative is called Breakthrough Starshot—a research and engineering project by Breakthrough Initiatives to develop a proof-of-concept fleet of tiny light sail spacecraft, called StarChips, capable of making the journey to the Alpha Centauri star system, 4.37 light-years away, at speeds between 20% and 15% of the speed of light, taking between 20 to 30 years to get there, respectively, and about 4 years to notify Earth of a successful arrival. The conceptual principles to enable this interstellar travel project were described in “A Roadmap to Interstellar Flight,” by Philip Lubin of UC Santa Barbara.

The project was announced April 12 by physicist and venture capitalist Yuri Milner and cosmologist Stephen Hawking, who is serving as board member of Breakthrough Initiatives. Other board members include Facebook CEO Mark Zuckerberg. The project has an initial funding of $100 million to start research. Milner places the final mission cost at $5–10 billion, and estimates the first craft could launch about 20 years from now.

The Starshot concept envisions launching a “mothership” carrying about a thousand tiny spacecraft to a high-altitude orbit, and then deploying them one by one. Ground-based lasers would focus a light beam on their light sail to accelerate each individual craft to the target speed (1/5 the speed of light) within 10 minutes.

If an Earth-size planet is orbiting within the Alpha Centauri system’s habitable zones, Breakthrough Starshot will try to aim its spacecrafts within 1 Astronomical Unit (93 million miles) of it. From this distance, its cameras could potentially capture an image of high enough quality to resolve surface features. The spacecraft fleet would have about 1,000 spacecraft, and each spacecraft would be a very small centimeter-sized craft weighing a few grams. They would be propelled by several ground-based lasers of up to 100 gigawatts. Each tiny spacecraft would transmit data back to Earth using a compact on-board laser communications system using its sail as an antenna. Having a swarm of a thousand spacecraft would compensate for the losses caused by interstellar dust collisions en route to the target.

The technical challenges are formidable. Light propulsion requires enormous power: a laser with a gigawatt of power (approximately the output of a large nuclear plant) would provide only a few newtons of thrust. The spaceship will compensate for the low thrust by having to have a mass of few grams. The camera, computer, communications laser, a plutonium power source, and the solar sail must be miniaturized to fit within a mass limit. All components must be engineered to endure extreme acceleration, cold, vacuum, and protons. The spacecraft will have to survive collisions with space dust; Starshot expects each square centimeter of frontal cross-section to collide at high speed with about a thousand particles of size 0.1 micron and up. Focusing a set of lasers totaling one hundred gigawatts onto the solar sail will be difficult, due to atmospheric turbulence. According to The Economist, at least a dozen off-the-shelf technologies will need to improve by orders of magnitude.