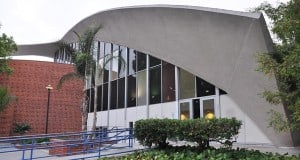 Described as, “truly a remarkable building that nearly defies description,“ by the Los Angeles Conservancy, which lists it as “one of the most breathtaking Modern buildings ever designed,” the task of renovating the fragile Robert Frost Memorial Auditorium at Culver City High School fell to Culver City architects Craig Hodgetts and Hsingming Fung four years ago.
“It is so unique, we didn’t know how to go about it,” architect Craig Hodgett told the crowd at the Culver City Historical Society’s meeting this past week. The firm worked on the design and its approvals for four years, with final approval coming from the California State Architects last week.
The auditorium’s design was determined partly by the irregularly-shaped lot it was to occupy as well as by the times: Modern was the design of the 1960s and reinforced concrete was the artistic material du jour. Architects created soaring domes, graceful arches and curvilinear creations out of it, Hodgett said.
The challenges with Culver City’s auditorium do not stem from its construction. “There are no cracks, no leaks,” he said. “It has weathered the Northridge earthquake and stresses of half a century perfectly.”
The inside, however, has not fared as well after thousands of students, assemblies, plays, concerts and classes. “The dome got all the attention and the inside is underdeveloped,” he said. Renovations have been discussed for years, said Historical Society Vice President for Development Janet Chabola. The money – $6 million – comes from the school bond and limits the renovations to the bare necessities, Hodgett said.
The unique, semi-circular, pleated, fan shaped-concrete roof is thin and fragile, he said, making it impossible to bear heavy loads. Architects came up with a drop-in design where construction will be inside, below the dome and away from the walls.
A steel proscenium arch provides a platform for lights to illuminate the vast and dark interior. Removing the air conditioning units from the stage allows a new stage design with a new 120-seat Black Box Theater and handicapped access to all areas front and back of house. The new air conditioning system replaces stale air with fresh throughout the facility. Fabric wraps on the steel arch dampen the acoustics and public restrooms will be renovated.
Construction challenges include the structural foundations. The pleats of the roof are what give it its strength. The ribs are held together with high tension steel rods and the challenge is not to touch these, or risk a collapse. The inadequate air conditioning ducts contain rats and asbestos, which must be dealt with.

“The renovations had to be almost as creative as the original design,” Hodgett said. “There was a great deal of grandfathering because the old design was not to code in a number of areas.”
“It’s fabulous,” Chabola said. “It’s everything I hoped it would be. They solved the problems in a very creative way.”

“Some people will be dismayed we couldn’t do everything,” Hodgett said, “but the budget is small for everything that needs to be done, so we are doing the essentials.” He listed a number of optional projects that other fundraising efforts could make happen, including upholstering the seating, renovating the lobbies or improving the sound system. Just cleaning the dome would cost a half million dollars, he said, and any change to the single pane black glass facade would require bringing the whole design up to code.
“It was an enormous gift to be asked to work on such an astonishing structure,” Hodgett said. “It is to Culver City’s credit that in 1963, the school board built the Robert Frost. It is one of a kind.”
The plans should go to contract June 1, with completion by August, 2017, he said.