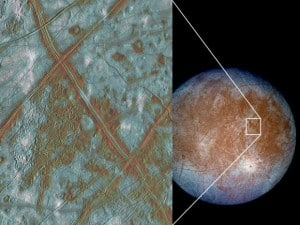 Jupiter’s moon Europa is under a constant gravitational assault. As it orbits, Europa’s icy surface heaves and falls with the pull of Jupiter’s gravity, creating enough heat, scientists think, to support a global ocean under the ice—an ocean that could be a habitat for life.

Now, experiments by geoscientists from Brown and Columbia universities suggest that this process, called tidal dissipation, could create far more heat in Europa’s ice—resulting in a thinner ice shell—than scientists had previously assumed.

The largest Jovian moons—Io, Europa, Ganymede and Callisto—were first discovered by Galileo in the early 1600s. When NASA sent spacecraft to Jupiter in the 1970s and 1990s, those moons proved to be full of surprises.

“Scientists had expected to see cold, dead places, but right away they were blown away by their striking surfaces,” said Christine McCarthy, a faculty member at Columbia University who led this new research as a graduate student at Brown. “There was clearly some sort of tectonic activity—things moving around and cracking. There were also places on Europa that look like melt-through or mushy ice.”

The only way to create enough heat for these active processes so far from the Sun is through tidal dissipation. The effect, McCarthy says, is a bit like what happens when someone repeatedly bends a metal coat hanger.

“If you bend it back and forth, you can feel it making heat at the junction,” she said. “The way it does that is that internal defects within that metal are rubbing past each other, and it’s a similar process to how energy would be dissipated in ice.”

However, the details of the process in ice aren’t very well understood, and modeling studies that try to capture those dynamics on Europa had yielded some puzzling results, the researchers say.

“People have been using simple mechanical models to describe the ice,” McCarthy said. While those calculations suggested liquid water under Europa’s surface, “they weren’t getting the kinds of heat fluxes that would create these tectonics. So we ran some experiments to try to understand this process better.”

Working with Reid Cooper, professor of Earth, environmental and planetary sciences at Brown, McCarthy loaded ice samples into a compression apparatus. She subjected the samples to cyclical loads similar to those acting on Europa’s ice shell. When the loads are applied and released, the ice deforms and then rebounds to a certain extent. By measuring the lag time between the application of stress and the deformation of the ice, McCarthy could infer how much heat is generated.

The experiments yielded surprising results. Modeling approaches had assumed that most of the heat generated by the process comes from friction at the boundaries between the ice grains. That would mean that the size of the grains influences the amount of heat generated. But McCarthy found similar results even when she substantially altered the grain size in her samples, suggesting that grain boundaries are not the primary heat-generators in the process.

The work suggests that most of the heat actually comes from defects that form in the ice’s crystalline lattice as a result of deformation. Those defects, the research showed, create more heat than would be expected from the grain boundaries.

“Christine discovered that, relative to the models the community has been using, ice appears to be an order of magnitude more dissipative than people had thought,” Cooper said.

More dissipation equals more heat, and that could have implications for possible life on Europa.