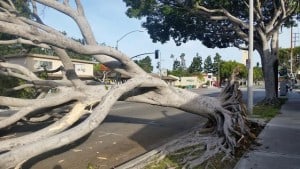 If your day last Friday featured an electrical outage or a fallen tree, you were not alone. According to Charles Herbertson, Director of the Culver City Dept. of Public Works, seven trees came down around the city, along with countless branches, boughs and palm fronds, keeping his crew busy all day and well into the evening. There were recorded gusts of up to 20 miles per hour, and a fairly steady pattern of 12 to 15 miles per hour through most of the morning.

The fallen tree at Braddock and Overland, pictured above, slowed traffic through the morning commute hours.

The top of a traffic light even came off at the intersection of Jefferson and Sawtelle, replaced by a city work crew in less than 3 hours. 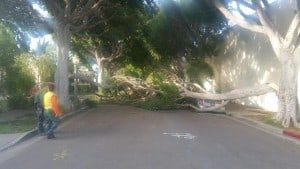 corridor that cut through the city where trees fell, but most of it was large limbs and palm fronds.” Herbertson noted a similar weather event last year, when half a dozen trees were toppled by powerful winds.

While some of the responsibility for the damage can be laid to the drought we also need to realize how our watering patterns affect the parkways. Without regular intervals of deep watering that will get into tree roots, we risk the trees weakening to the point where – as we saw- all it takes is a few hours of gusting wind to break them.