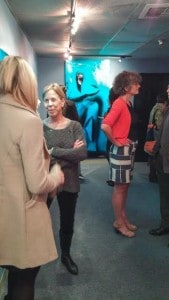 Culver City’s Wende Museum is open to the public on Fridays from 10 a.m. to 5 p.m., so today the public can view “Artistic Impressions of the Cold War,” the first exhibit to feature art exclusively at the 12-year-old museum of artifacts, art and educational materials from the era of the Berlin Wall.
“From Soviet hippie jeans to East German telephones, the artists were inspired by the Perestroika era of Berlin and Germany,” founder and Executive Director Justin Jampole said at the opening last week. “It was impossible to think 12 years ago that we would be here (opening this exhibit) with the move to a new facility ahead of us.”
The three-room exhibit walls are covered with impressions of events following the fall of the Berlin Wall created by local and international artists who scoured the archives for ideas and images, then recreated them in new materials from video to paper to photo images.
“The Wende is a place for exploration, a place of history and art,” said Chief Curator Joes Segal. “The German telephones are as much about communication as 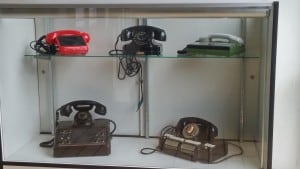 the fact that often someone else was listening to your conversation.”
Jennifer Vanderpool explored the city of Leningrad, which reverted to Saint Petersburg following the collapse of the Soviet Union.
Farrah Karapetian’s “Nothing Comes Between Me and Me Between Comes Nothing” featuring Soviet hippie jeans, the history of denim and impressions of 15-year-old Brooke Shields wearing skintight jeans in iconic poses.
Dutch artists Richtje Reinsma and Daphne Rosenthal created “Free Things,” featuring objects from the museum’s extensive collection, including telephones.
Comments from visitors included appreciation for the authenticity of the everyday artifacts, such as beard stubble on a soldier’s uniform, and the implications the Cold War has for the present.
This free exhibit will be at the current location at 5741 Buckingham Parkway until Aug. 12. A new exhibit called “Questionable History” is scheduled to open Aug. 22.
Dr. Jampol said the museum’s move to the former Culver City Armory on Culver Blvd. is now scheduled for early 2017.
The Wende has a continuing exhibit, “Facing the Wall: Living with the Berlin Wall,” at the museum, as well as an online exhibit, “Living in a Socialist City: Urban Strategies in East Germany.” Both will run until December 31.