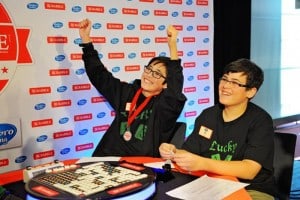 “Lucky 13” – a team composed of eighth-grader Cooper Komatsu of Culver City Middle School and his seventh-grade partner Jem Burch of Van Nuys – recently won the 2016 North American School Scrabble Championship (NASSC).
He and Jem became friends four years ago over a shared love of the game.
Competing in a field of 85 fourth- through eighth-grade teams from all over the United States and Canada, Cooper and Jem withstood eight rounds over a period of two days to win it all.
They played their games on April 9 and 10 at the spectacular Gillette Stadium in Foxborough, Massachusetts, in a space overlooking a New England Revolution soccer match.
After all their practice and studying, “Lucky 13” won $10,000, trophies, and the bragging rights of being the best fourth- through eighth-grade student players in North America.
Favorite bingos (50 point bonus plays) included “awaited,” “docilely,” and “agnosia” – which Merriam Webster defines as “a loss of ability to recognize familiar objects.”
High win was 521 points, with an average score of 452 points per game.
Cooper is passionate about Scrabble as a tool for memory, math, word knowledge, and fun. He wants to share his interest with other students his age, perhaps by starting a high school club next year at CCHS.
Now that the tournament is over, he is ready to switch back to studying for the 2016 Scripps National Spelling Bee, which will take place in National Harbor, Maryland on May 25 and 26, and will be televised on ESPN.
“Cooper also looks forward to finishing off his eighth-grade year at CCMS with a trip to Magic Mountain and other end-of-middle-school festivities,” said his mother, Deborah. “This year has truly been his ‘Lucky 13!'”