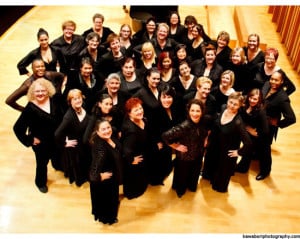 The eclectic VOX Femina Los Angeles choir presents “Harmonious Women: Rocking the Universe” on Sunday, April 24, 2016, 3 pm at Culver City Presbyterian Church in Culver City. The concert features repertoire from the three subscription concerts that make up VOX Femina’s 19th Season, including a new commission by Abbie Betinis called “A Blessing of Cranes.” We will take an uncommon look at the political and social achievements of women in history, women of renown and women of extraordinary creativity. And then we’ll sing and jam to music of rock icons: David Bowie, Joni Mitchell, Indigo Girls and other artists. Expect a fun afternoon of music that will get your groove on!

“Harmonious Women: Rocking the Universe” is truly a celebration of what VOX Femina is all about – giving voice to women through quality choral literature. In a world that is rapidly changing, VOX Femina continues to bring awareness to issues that affect women. The concert will demonstrate the wealth and breadth of the music that VOX Femina is known for – everything from classic choral repertoire to contemporary rock and roll!

VOX Femina Los Angeles is a women’s ensemble dedicated to the performance of quality choral literature from a world perspective, with emphasis on music by women composers. Through music, we aim to create a world that affirms the worth and dignity of every person. The chorus was founded in 1997 by Artistic Director Dr. Iris S. Levine. VOX Femina first appeared on stage as guest artists with the Gay Men’s Chorus of Los Angeles. Since that time, VOX Femina quickly established itself as one of the premier women’s choruses in the United States with a demonstrated ability to perform a highly eclectic repertoire, some of which can be heard on several recordings. The ensemble actively fulfills its mission through an aggressive schedule of performances, touring and educational outreach. VOX Femina has demonstrated its support and encouragement of living composers through commissioning new works.

Dr. Iris S. Levine, Founder and Artistic Director, is nationally recognized for her excellence in choral conducting. Through her extensive experience with women’s choral literature and innovative concert programming, Dr. Levine has charted VOX Femina on an impressive 19-year journey, building its prominence in the choral community by way of numerous appearances at ACDA (American Choral Directors Association) conventions, and over 200 appearances throughout the United States, Mexico and Canada.