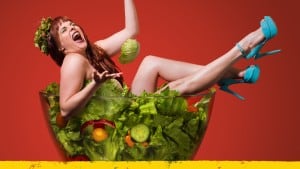 I so dislike the term ‘edgy.’ It’s become so overused, it’s lost it’s original connotation. But this play really is edgy. Sharp. Pointed. After telling many people how much I enjoyed it, I heard from a number of folks who didn’t like it at all. All that sex- embarrassing!  This stuff about pharmaceuticals and cosmetics – bizarre! And the food … but I feel that going to the theater, unless you are strictly into revivals of Rogers & Hammerstein musicals, wants to be risky. Take a chance. These characters onstage might say something to you about your world that will give you a whole new way of seeing it.

The women who are laughing with salad are not alone, they are cruelly aware of how much scrutiny they are under. They look at each other, they look around to see who is looking, and they are so completely consumed by the concept that they exist to be approved of by others – specifically, men – that what they want to feel doesn’t even come into it.

Playwright Sheila Callaghan has a great ear for dialogue and keen eye for relationships. Our only male in the first act, a guy named Guy, is equally confused by his job as a waiter (why don’t these women ever eat anything they order? Why don’t they order food?)  his relationship with his girlfriend ( she tells him “But I wanted to like it because I thought you wanted me to want to like it.”) and his powerful mother who seems to be committed to ‘beauty treatments’ imported from Terry Gilliam’s film Brazil (what will these aging women endure in the name of male approval? ) It all leaves him sad and baffled, even knowing they do it for him, for the men they want to impress.

The women show a paradoxical strength through their awareness of their vulnerabilities; the strong and sexy Meredith dancing to draw a lover (He’s lookin’ oh yeah, I know he’s lookin’) , the painful recitation of the brunch menu by the anorectic Tori, ( vowing “I will eat that, I will,” betraying through her voice and posture that she won’t) and Sandy, Guy’s mother, whose uptown address and monied manners would seem to give her power, until we realize what she is putting herself through in the name of beauty.

“Women…” also takes on the enormous question of mood medication for the oppressed. Everything hurts, so why not swallow something to numb you out? If you can’t change the world because you can’t even be happy with yourself, how about just getting through the day? Marketing, presented as poetry’s evil twin, shows us why pictures of happy women and salad are so depressingly familiar.

The twist in the second act is too good to be revealed, and another great reason to take a risk. Go and see a play that leaves you wondering what you feel, how you think, what relationships you value the most. As a woman for whom delicious food is right up there with delicious sex and the approving gaze of strangers, this play asked me a lot of very intriguing questions. If you are female, it might be a long time before you lift a forkful of lettuce toward your mouth without wondering why.