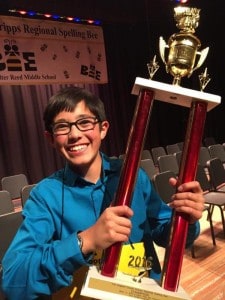 Culver City Middle School eighth-grader Cooper Komatsu won the Scripps L.A. County Regional Spelling Bee on Sunday, March 13 at Walter Reed Middle School. He competed in a field of 95 contestants from all over Los Angeles County, with students ranging from third- to eighth-grade.
This is Cooper’s second win and his last year of eligibility.
He will be continuing on to the National Spelling Bee outside Washington DC from May 22-27 at the Gaylord National Resort and Convention Center in National Harbor, Maryland. The final, on-stage rounds of competition will be televised on ESPN.
Cooper’s winning word was “gudgeon”, meaning:
1. a small, edible, European freshwater fish, often used as bait by anglers.
2. archaic a credulous or easily fooled person.
“He is very excited to get another chance to compete at the national level and grateful to CCMS and the community for helping him get there!” said his mother, Deborah.