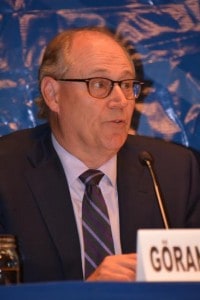 The Apartment Association of Greater Los Angeles (AAGLA), Southern California’s leading advocate for affordable quality rental housing, announced today that it has supported small business owner Göran Eriksson in his bid for a seat on the Culver City Council.
“I’m honored to have earned the support of AAGLA, which has fought for affordable housing for nearly 100 years,” Eriksson said. “AAGLA knows we need Council members who will fight for more attainable housing throughout Culver City.”
Eriksson said he believes it is critical for the city to have housing stock at every price level so that seniors can afford to stay in the city they love and young residents can find places to live on an entry-level salary.
“Culver City is a highly desirable place to live and work, but we need to make sure we have adequate workforce housing and affordable housing to serve our city,” said Eriksson, who added that he would implement a multi-pronged approach that would encourage developers to build more affordable housing units in our city while fighting for more housing money from the state.
“One of the functions of Redevelopment was to provide for affordable housing, and when the state eliminated Redevelopment Agencies across California, that money disappeared. It is high time that Sacramento returns those much-needed funds to the local level, which would allow the city, in cooperation with the county, to provide housing that is affordable to people of all socio-economic levels.”
Eriksson added that of primary concern to him is the creation of affordable senior housing that would allow seniors to age in place instead of being priced out of the community where they have spent all or most of their lives.

“We are proud to support Göran Eriksson because we know he will be a strong advocate for affordable housing and will stand shoulder-to-shoulder with us to make sure Culver City does its fair share to address the housing shortage,” said Fred Sutton, AAGLA’s Government Affairs Manager.
The endorsement comes on the heels of last week’s endorsement of Eriksson by the Culver City Firefighters Association and builds on a growing number of individuals and organizations that have thrown their support to Eriksson.
He has been endorsed by four of the five Culver City Council members: Mayor Mehaul O’Leary, Vice Mayor Andy Weissman, Councilman Jeff Cooper and Councilman Jim Clarke. Eriksson has also been endorsed by four of the five members of the Culver City Board of Education: CCUSD Board President Steve Levin, CCUSD Board Member Kathy Paspalis, CCUSD Board Member Sue Robins and CCUSD Board Member Anne Burke.