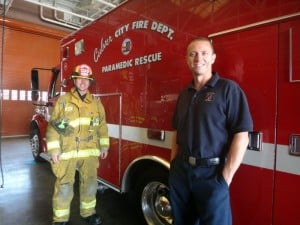 The Culver City Firefighters Association, which represents the men and women of the Culver City Fire Department, announced last Friday, March 7, 2016 that it has endorsed small business owner Göran Eriksson in his bid for a seat on the Culver City Council.
“We appreciate that Mr. Eriksson has taken the time to get involved in numerous aspects of the city and develop a full understanding of how our city works,” said Fire Captain Dave Rindels, President of Culver City Firefighters Local 1927. “We look forward to working with him to keep public safety a top priority.”
Eriksson has been a longtime supporter of the city’s police and fire departments and has been an advocate for an enhanced emergency dispatch system to reduce response times. He is also a proponent of new technology that would provide the city’s first responders with more-detailed information before they arrive at the scene of an emergency, a more robust support system for emergency response teams (CERT) and the possibility of refresher training of volunteers who may be called upon to act in an emergency.
“To give our Neighborhood Emergency Response Teams (NERTs) an increased chance of assisting in an emergency, we should look at the possibility of pre-deployin some critical material at strategic points in the city,” Eriksson said. “In the wake of a major earthquake, for example, firefighters will likely be unable to reach every corner of the city to help. CERT has been trained in using fire hoses and turning on the fire hydrants in local neighborhoods, so if hoses, fire hydrant wrenches, nozzles, etc. are stationed at our parks and other central locations, CERT members could access the equipment and get to work until firefighters can arrive.”
A CERT-trained volunteer himself, Eriksson has a special affinity for firefighters, having worked with firefighting while in the Swedish Army.
“He has stood in our shoes,” Capt. Rindels said. “He understands the kind of work we do, and we’re proud to support him.”
The endorsement builds on a growing number of individuals and organizations that have thrown their support to Eriksson.
He has been endorsed by four of the five Culver City Council members: Mayor Mehaul O’Leary, Vice Mayor Andy Weissman, Councilman Jeff Cooper and Councilman Jim Clarke. Eriksson has also been endorsed by four of the five members of the Culver City Board of Education: CCUSD Board President Steve Levin, CCUSD Board Member Kathy Paspalis, CCUSD Board Member Sue Robins and CCUSD Board Member Anne Burke.
“Ours is a city with many different political and social views and I am honored that so many people, many of whom come from different backgrounds and political viewpoints, have chosen to endorse me,” said Eriksson, who has also been endorsed by four former mayors and seven former members of the CCUSD Board of Education.