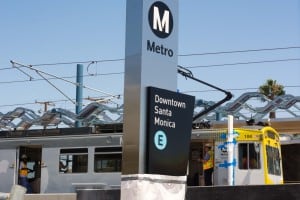 •This is the first rail transit to the far Westside since streetcars halted service in 1953.

•The Expo Line will be a good alternative to the congested Santa Monica Freeway. The trip between 7th/Metro Center in downtown Los Angeles and the Downtown Santa Monica Station is expected to take 46 minutes.

•Many of you voted to pay for this project, which was largely funded by the Measure R half-cent sales tax increase increase approved by Los Angeles County voters in 2008. This is the second rail project funded by Measure R — the first, the Gold Line Extension to Azusa, opens March 5.

–Palms, an aerial station at the intersection of Palms Boulevard and National Avenue.

–Westwood/Rancho Park, a street-level station on Westwood Boulevard, .3 miles south of Pico Boulevard and the Westside Pavilion. This is the best transfer point for buses headed up Westwood Blvd. to Westwood Village and UCLA.

–Expo/Sepulveda, an aerial station on Sepulveda Boulevard, just south of Pico Boulevard. A number of offices, retailers and neighborhoods are nearby, including Sawtelle Japantown.

–Expo/Bundy, an aerial station on Bundy just south of Olympic Boulevard. A variety of offices and retailers are nearby. The station is also about one- to 1.5 miles to the Santa Monica Airport and the neighboring business parks along Ocean Park Boulevard.

–26th/Bergamot, a street level station adjacent to the Bergamot Station arts complex in Santa Monica and across Olympic Boulevard from the Water Garden office complex. Many other offices are nearby.

–17th Street/SMC, a street level station at Colorado and 17th Street that is a .6-mile walk or bike ride to Santa Monica College.

•Trains will run every 12 minutes at most times of the day with service beginning about 4 a.m. on weekdays and ending around midnight. On Friday and Saturday nights, Metro Rail runs until 2 a.m.

•There will be parking available at three stations: Expo/Sepulveda (260 spaces), Expo/Bundy (250 spaces) and 17th Street/Santa Monica College (70 spaces). Metro staff have proposed a test parking fee program for these stations that still must be approved by the Metro Board of Directors. The fee would be $2 a day for those using Metro Rail.

•A regular adult fare on Metro is $1.75 and includes two hours of free transfers. That means you will be able to travel between Santa Monica and destinations such as DTLA, Long Beach, Pasadena and Hollywood for a $1.75. Please see this page for more info on discounts for seniors, students, the disabled and Medicare recipients. There are also other transit subsidy programs for eligible low-income recipients.

•There is a paved bike path along much of the Expo Line’s second phase — between Culver City and Palms and then between Overland Avenue and Colorado/17th Street in Santa Monica. The city of Los Angeles is working on finding the best route between Palms and Overland Avenue, where the train travels in a narrow trench. There is a bike lane on Exposition Boulevard on the first phase of the Expo Line west of Vermont Avenue. There is a paved bike path between La Cienega/Jefferson Station and Culver City Station. Here’s the Metro bike map.

•Metro Rail will grow to 105 miles of routes with the addition of Expo 2 and the Gold Line to Azusa. Santa Monica will become the 17th city in Los Angeles County to have a Metro Rail station. Including the Gold Line extension to Azusa that opens March 5, the others are Arcadia, Azusa, Compton, Downey, Duarte, El Segundo, Hawthorne, Inglewood, Long Beach, Los Angeles, Lynwood, Monrovia, Norwalk, Redondo Beach, South Pasadena and Pasadena.

•The Expo Line largely follows the old Exposition railroad right-of-way that was used by Pacific Electric streetcars and freight trains. The right-of-way was purchased from Southern Pacific in the early 1990s to preserve the corridor for possible future use as a rail line.

•After plans to build the Red Line subway to the Westside went kaput in the 1990s due to funding shortfalls, Metro began seriously studying use the Expo Line corridor to get rail to the far Westside.

•Construction of the Expo Line was done in two phases due to funding availability. The first segment broke ground in 2006 and opened to Culver City in 2012, the same year that heavy construction ramped up for Phase 2.

•The passage of the Measure R half-cent sales tax increase in 2008 provided the funding to continue the Expo Line to Santa Monica. The project cost about $1.5 billion.