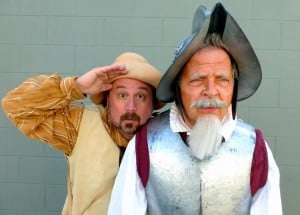 Kentwood Players proudly presents the multiple Tony Award winning musical “Man of La Mancha” with Book by Dale Wasserman, Music by Mitch Leigh and Lyrics by Joe Darion opening Friday, March 11 through Saturday, April 16, 2016 on Fridays and Saturdays at 8:00pm and Sundays at 2:00pm, with three Thursday night performances on March 31, April 7 and 14 at 8:00pm, at the Westchester Playhouse, located at 8301 Hindry Avenue in Los Angeles, CA 90045. The production is directed by Susan Goldman Weisbarth with Musical Director Mike Walker and Choreographer Drew Fitzsimmons, produced by Margie Bates and Gail Bernardi by special arrangement with Tams Witmark Music Library.

Inspired by Miguel de Cervantes and his seventeenth-century masterpiece Don Quixote, the 1966 multiple Tony Award winning musical “Man of La Mancha” tells the story of the “mad” knight, Don Quixote, as a play within a play, performed by Cervantes, his manservant, and his fellow prisoners as he awaits a hearing with the Spanish Inquisition. Cervantes takes out a makeup kit from his trunk and in a few short moments, transforms himself into Alonso Quijana, an old gentleman who has read so many books on chivalry and thought so much about injustice that he has lost his mind and now believes he should go forth as a knight-errant, renaming himself Don Quixote de La Mancha and setting out to find adventures with his “squire” Sancho Panza. Quixote attempts to avoid his mortal enemy, the Enchanter, and woo the serving wench and prostitute, Aldonza, who he takes to be the lady Dulcinea. The musical continues to play in many countries around the world with its principal song, “The Impossible Dream” a much-loved standard.

Tickets are $25.00 with a $2.00 discount for seniors and students. To purchase tickets, please call (310) 645-5156 during box office hours, Wednesday through Saturday from 4:00-7:00pm. You may also purchase tickets online at www.kentwoodplayers.org. For group ticket sales of 10 or more, please call the box office for group rates. This musical is appropriate for all ages, but children under 16 must be accompanied by an adult in the theater.

To meet the “MAN OF LA MANCHA” production team and learn more about Kentwood Players and what goes on at the Westchester Playhouse, the public is invited to attend our membership meetings, which are free and held on the third Wednesday of each month at 7:30pm at the Westchester Playhouse, located two blocks west of the San Diego Freeway and two blocks north of Manchester at 8301 Hindry Avenue in Los Angeles, CA 90045.