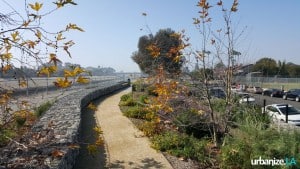 After a five-month delay, Del Rey’s long-awaited Milton Street Park has opened along the banks of Ballona Creek.

The approximately $3 million project was funded by the Mountains Recreation & Conservation Authority, which has worked for years to improve Ballona Creek and the popular bike path through the addition of new fencing, landscaping drinking fountains and benches.

According to the website of landscape architecture firm SWA, the approximately 1.2-acre linear park is highlighted by green-design elements such as recycled building materials, native foliage and flow-through planters. Other features include a bird-watching platform, informational signage, outdoor seating and picnic areas.

Milton Street Park replaces a formerly vacant lot owned by the Baldwin Hills Regional Conservation Authority. The property, which measures 1,000 feet by 45 feet, had remained undeveloped due to its unusual dimensions.

Earlier plans had called for a variety of improvements to the park’s namesake street, including the addition of speed bumps and a mid-block crosswalk.