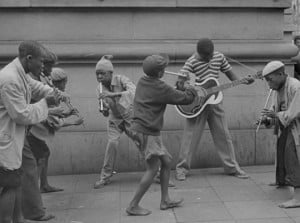 This month Black Talkies On Parade presents the 1959 groundbreaking film Come Back Africa Directed by Lionel Rogosin, the film straddles both the fiction and documentary genres as the movie uses real people from South Africa to act out scripted situations close to their own lives. Rogosin and his wife spent six months in South Africa before shooting the film in order to get to know the country and its people. Come Back Africa tells the story and struggle of its characters as they deal with famine, a poor job market, crime and repression. Come Back Africa has screened at numerous film festivals and was named by Time magazine one of the best films of 1960.

Your afternoon host will be Lloyd Clayton, Executive Director and following the screening there will be a Q&A with our resident film historian Les Wills.